An Agriculture Ship (often abbreviated as "agro ship" or "ag ship") is a spaceship designed to supply colonies with fresh foodstuffs in the event they cannot do so themselves. Ag ships often are the only source of food in systems where edible plants cannot be grown on the planets. An single ship can support a number of people equal to 200 times its hull size.

Food usually is grown hydroponically in nutrient solutions to produce as much food as possible in a short time. Ag ships use solar energy from a system's star but also have auxiliary power sources to provide the light and heat needed by growing plants.

Because most of the work is done by robots, an ag ship only needs six to eight crew members (four plus one per five points of hull size).

Ag starships are capable of interstellar travel. They are very expensive to build and move, because of the large amount of mass in the form of water that they must carry. Sometimes, however, the only way a new colony in some remote star system can be provided with food is by sending an such a ship to that system. The smallest type of ship that can supply the colony's needs will be sent. [1] 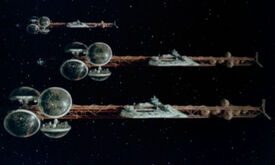 Agriculture system ships are generally similar to ag starships, but are limited to travel within one star system. Just like an ag starship, an ag system ship can support a number of people according to its hull size (10-20) and requires a crew of between six and eight to function properly.

Agriculture space stations (agro stations/ag stations) serve the same function as ag ships, but they have no engines (station hull size 4-6). Most are in permanent orbits around planets, but some are placed in a planet's Lagrange points to collect constant amounts of solar energy. An ag station can produce enough food to feed a population of 2,000 times it's station hull size.

A crop will grow and be ready for harvest after one month. Seeds and nutrients cost 1,500 Cr per ship hull size point. If the owner of the ship puts 10% of his crop back into the "fields," however, he can start growing a new crop without buying additional seeds or nutrients. Agriculture space stations are essentially the same as ag ships, but seed/nutrient cost and crop yield are multiplied tenfold, so that each hull size point will feed a base 2,000 creatures.

Smaller ag ships (HS 5-9) exist, but due to their high cost to yield ratio are rarely worth the cost of deployment, so they are no longer constructed. The few surviving examples are kept on-station supplying small habitats and mining ventures.

Some larger ships, such as Spaceliners and colony ships sometimes carry agricultural equipment to increase endurance, supplement a colony or even serve as an integral part of life support.

Retrieved from "https://starfrontiers.fandom.com/wiki/Agriculture_Ship?oldid=13650"
Community content is available under CC-BY-SA unless otherwise noted.