Battleships (aka Dreadnoughts) have replaced heavy cruisers as the flagships of the line. At hull size 20, battleships are the mightiest vessels to travel between the stars. The UPF has only a few of them, and they usually stay near the larger space stations. Battleships have never fought in ship-to-ship combat, so their effectiveness is a matter of theory.

The first time a Battleship seen action was in the Battle of Fortress Kdikit, with an early model of the Clinton-class Battleship. Since then, the battleships have had a major retrofit to increase overall firepower, as weapon development grew in the onslaught of Sathar invasions. During the Second Sathar War, all three battleships seen action against the invading Sathar fleets. They proved instrumental in driving out the invading fleets. 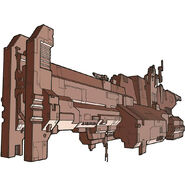 Human Battleship
Add a photo to this gallery
Retrieved from "https://starfrontiers.fandom.com/wiki/Battleship?oldid=12554"
Community content is available under CC-BY-SA unless otherwise noted.