Belnafaer has only three planets orbiting it. Two of these (Gog and Magog) are in close orbit around the star and are hot, rocky and barren. The third planet, Venturi, is a cloud gas giant planet which orbits Belnafaer at a much greater distance and has an extensive system of moons and rings.

The Belnafaer system was first charted by a survey ship under charter by the ByChem Corporation. The survey noted nothing of interest until an atmoprobe (an unmanned, atmospheric probe) was sent into the upper atmosphere of the gas giant planet Venturi. This not only reported the presence of the expected gases (hydrogen, helium, methane, etc.) but also found low concentrations of several bio-chemicals (including Cys-DiEropadyne and Meta-Trilphidone) which had never been encountered in nature before. 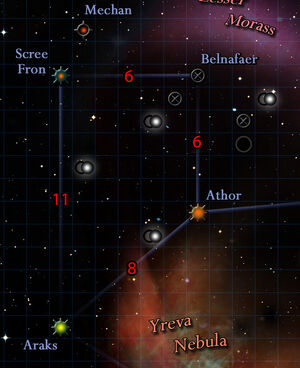 The system is served by two commercial routes, recently opened as a shortcut in the Athor-Scree Fron route:

Retrieved from "https://starfrontiers.fandom.com/wiki/Belnafaer?oldid=13528"
Community content is available under CC-BY-SA unless otherwise noted.