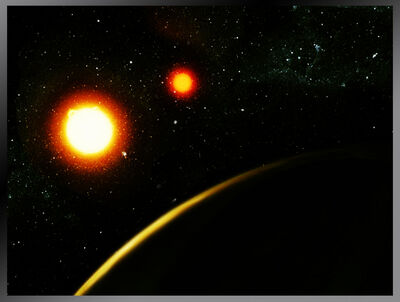 A binary star is a star system consisting of two stars orbiting around their common center of mass. The more massive star is called the primary and the other is its companion star, or secondary. These systems, especially when more distant, often appear to the unaided eye as a single point of light, and are revealed as double (or more) systems when analyzed by other means.

Some binary star systems have long orbital periods of several centuries or millennia and therefore have orbits which are uncertain or poorly known.

If components in binary star systems are close enough they can gravitationally distort their mutual outer stellar atmospheres. In some cases, these close binary systems can exchange mass, which may bring their evolution to stages that single stars cannot attain.

Binary Star Systems in the Frontier[1]Edit

The Standard Map of The Frontier and The Rim includes fourteen binary systems (three of these in Rim space), not including the Formad Cluster.

All binary systems are classified as "uninhabitable" due to a lack of suitable planetary bodies therein; this is not to say that they are actually uninhabited: most have asteroid and (Kuyper belts and cometary shells, as well as minor rocky or gaseous planets that may house mining ventures, research facilities or even secret military, corporate or "pirate" bases.[2]

Retrieved from "https://starfrontiers.fandom.com/wiki/Binary_Star_System?oldid=13529"
Community content is available under CC-BY-SA unless otherwise noted.