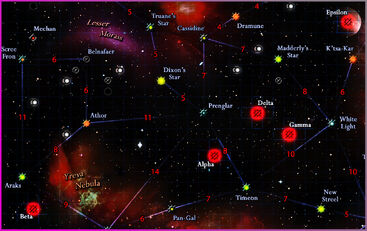 The Blue Plague was a major epidemic that spread across the Frontier in Federation Year 17 and ended ten years later. It halted space travel and virtually paralyzed the entire sector.

In the end, 17 million victims fell to the plague, and five systems remain in a permanent quarantine. Tough new laws were established by the UPF to prevent future outbreaks.

FY 17-27 Plague sweeps the Frontier. It is named the "Blue Plague" because of its earliest symptoms - large blue welts that appear about the face and extremities. These welts leave horrible black scars on the survivors.

Scientists theorize that the plague was brought to the Sundown system by an alien vessel which crashed on Starmist. Due to Starmist's light population, the disease was not immediately detected and had a chance to mutate. It is theorized that native vermin became infected and gained entry to a ship. The ship then made several stops along the Frontier and the plague spread rapidly.

FY 20 Five star systems become so overrun by the plague that the Council of Worlds, the governing body of the UPF, requests all races to recognize a permanent quarantine. The systems are designated by Greek letters (Alpha, Beta, Delta, Gamma, and Epsilon). Any spaceship seen attempting to leave one of these systems is to be destroyed by Spacefleet before it can spread the disease any further.

FY 22 Hargut, Pale, and Clarion suffer massive population losses due to the Blue Plague. All three planets are temporarily quarantined.

FY 23 The Medical Services Organization is founded. Funding pours in from most of the Frontier worlds. Gretl Grohn is named as the MSO Chief Surgeon.

FY 24 A vaccine for the Blue Plague is discovered at the MSO Center on Morgaine's World.

FY 25 The Mechanon threat on Volturnus first comes to the UPF's attention, but cannot be dealt with because of the plague.

FY 27 The plague is eradicated from inhabited planets in the Frontier. In all, seventeen million victims fall to the disease.

FY 28 Tough regulations are laid down by the UPF concerning inter-system transportation and handling of flora and fauna. Star Law is given jurisdiction over planetary imports and exports.

Retrieved from "https://starfrontiers.fandom.com/wiki/Blue_Plague?oldid=12097"
Community content is available under CC-BY-SA unless otherwise noted.