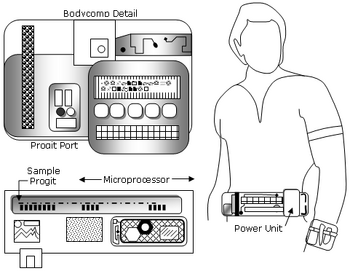 Bodycomps or Personalized Body Computers are a type of Computer worn as a belt, or carried in a case, backpack, or on installed in helmets. Microcomputerization changed the lives of virtually all members of the Frontier. Bodycomps and progits are readily available and have made vast arrays of knowledge accessible to Frontiersmen of all walks of life. Areas on the bodycomp accept progits. Bodycomp program units or progits, as they are commonly called, are small 10cm square, 5cm thick hardware units that hold software. They have one software package installed and snap into bodycomps.

Bodycomps are by far the most popular and widely used computer type. The development of the modular system of computer snap-on program units (progits) and hardware that is completely compatible with all bodycomp models brought the personal computer out of the home and onto the waist.

The best way to picture what a bodycomp looks like is to imagine a wide belt made of extremely durable plastic bonded over solid state computer circuitry.[1] On the belt are two wallet-sized white plastic units: one is the power source, the other is the processor. At intervals along the belt there are twelve 5-cm square plastic plugs. These plugs can be removed to revel an open circuit ready for a progit to be plugged in. The bodycomp comes in different styles for different races but they all have identical access ports and use identical power packs, processors, and progits.

Most people on the Frontier wear a bodycomp for such diverse needs as astronavigation, communications, business matters, etc. The maximum number of progits on a bodycomp belt as any one time is twelve. This is in addition to the required power pack and processor pack. However, the number of progits that can be used at any one time depends on the types of power and processor packs.

Both the progit and the hardware required for its use are listed under the progit descriptions. The costs for progits are separate from any hardware costs, and both are listed on the Equipment Tables. The cost of connector cords, adaptors, etc. is included in the progit cost.

Vehicular computers (VCs) control various functions of Frontier vehicles and have many similarities to body comps. VCs are discussed in the Vehicles section later in this book.

A bodycomp requires a power pack, which is similar to a high-power, long-life battery, to power all of its functions. The differences in the following power packs are in their duration and amount of progits they can handle at any one time. A computer power pack's duration is listed below. It can be recharged for the cost shown below. It can never be used to power anything else.[2] The basic belt costs 1,000 credits, and weighs 2 kilograms, or 3 with power pack.[3][4]

Sixpack: The least powerful and cheapest computer power pack. It can provide power for any of the following: a) one Type A or B processor pack and six progits, or b) one Type C processor pack and four progits. A sixpack costs 200 credits, lasts for one month and costs 50 Cr to recharge.[5]

Kingpack: The top-of-the-line computer power pack used by the very rich, very important, or very busy. It can provide power for one processor pack of any type and twelve progits. The kingpack costs 500 credits, lasts for one year and costs 450 Cr to recharge.[8]

The bodycomp's processor pack is the organizer, brain, and interpreter for the entire system. There are four types of processor packs (all the same size).

The personalize computer can vastly expand a character's identity and abilities, if used properly. Avoid bogging the game down the overuse or over-concentration of technical items, but allow the players to experience some of these new items. A wise referee will introduce only the lesser versions of the bodycomps at first: sixpacks, Type A or B progits, and Type A or B type processor packs.

Break the players in slowly to this new concept so that, by the time the campaign is ready for the more powerful progits, the players' use of the basics is second nature. This will save both the referee and the players a lot of time continually referring to the equipment section for even the simplest progit explanations.

Retrieved from "https://starfrontiers.fandom.com/wiki/BodyComp?oldid=9056"
Community content is available under CC-BY-SA unless otherwise noted.