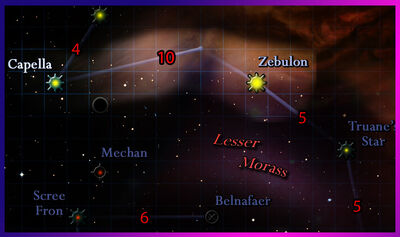 There is some misconception regarding the relationship between the Capellan Pass and the Zebulon Corridor; the latter refers exclusively to the Truane's Star-Zebulon route, while the former is both the Zebulon-Capella route proper and the commercial name given by shipping companies to the Pale (Truane's Star) - Faire (Capella) route.

Retrieved from "https://starfrontiers.fandom.com/wiki/Capellan_Pass?oldid=13885"
Community content is available under CC-BY-SA unless otherwise noted.