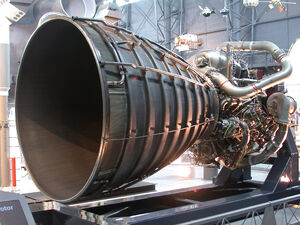 Despite the proliferation of ion and atomic engines, the simplicity, economy, and ease of use of chemical drives keeps them a vital part of the Frontier's economy in the modern era.

Chemical engines are most often used by two types of vessels: shuttles and system ships.

Shuttles are small (HS 1 or 2) ships that are generally designed to land on the surface of a planet and take off again without resorting to external fuel stores. Other shuttles may be designed for short-range transport between two space-borne facilities.

Shuttles save fuel by gliding most of the way in and either landing horizontally on a runway or switching to atmospheric mode, wherein it has flight characteristics similar to an aircar, including limited VTOL capability.[1] Most shuttles are capable of carrying a double load of fuel, allowing them to take off from planets without resorting to external boosters or fuel stores, although this drastically reduces their cargo capacity.[2]

A Lander/Orbiter is a larger shuttle (HS 3-5) specifically built to ferry relatively large amounts of cargo, passengers or materiel between a planetary surface to orbit (a station or waiting ship) and vice-versa.[3]

On rare occasion, L/O's may be used for in-system interplanetary transport.

Shuttles and Lander/Orbiters use simpler controls and are generally pre-programmed with the route and destination coordinates, allowing them to be piloted by Level 6 Technicians without levels in the Piloting Skill.[4] In piloting circles, such an uncertified pilot in legal charge of a shuttle is titled a coxswain.

System Ships, also commonly known as System Haulers (the name is something of a misnomer, since not all are freighters), are spaceships designed for in-system transport or production; usually mined/refined ore, cargo/ materiel, or agricultural products. This designation is also frequently used for ships of many other designs not intended for interstellar transport.

System Ships can carry a tremendous amount of cargo at a fraction of the cost for an equivalent-sized ion- or atomic-drive ship. In addition, their simplicity of design and maintenance makes them easier to construct and operate; this is evidenced by the proliferation of Class II Ship Construction Centers.

Chemical drives commonly use one of two types of fuel; liquid oxygen (LOx) or the erroneously named "solid oxygen", which is actually a stabilized composite. Each type is mutually exclusive of the other; LOx must be cryogenically maintained and handled with extreme care, but can be controlled much more easily by the pilot, which makes it the preferred fuel for System Ships and shuttles carried inside other ships (particularly system haulers, which can then share fuel).

LOx can be dispensed from large tanks or from pre-measured self-contained refrigerated containers that permit handling in a shirtsleeve environment.

Solid fuel comes pre-packaged in molded cylinders that are loaded directly into the engine and ignited sequentially (individually or in groups) until the desired velocity is reached. The great advantage of this system is its inherent safety and stability; the fuel cylinders are stable in a wide range of conditions and temperatures and can be handled in a shirtsleeve environment without additional consideration.

On the other hand, once ignited, a cylinder must burn itself out; ejection is not an option (ejection separates the entire engine, including unused cylinders), and the pilot does not have as fine control over the vessel as is possible with other engine types.

All chemical drive ships equipped for trans-atmospheric travel are equipped with external take-off assist (EXTO) pods that accommodate either additional solid fuel cylinders or external reusable fuel stores that are jettisoned after use. Some smaller shuttles are constructed with this additional fuel bunkerage internally, but it takes up valuable cargo space, so it is not a universally seen design feature.

Almost without exception, chemical drive ships designed for landing on a planetary surface are designed with decks parallel to the thrust axis, allowing for crews and passengers to walk normally when the vessel is landed on the surface of a planet or when gliding in for landing.

Most such ships take off horizontally from a runway to conserve fuel, but by manipulating the engine nozzles and increasing fuel consumption, may perform RATO (Rocket Assisted Take-Off) and STOL/VSTOL. Landing is generally done by gliding in, but if enough fuel remains, STOL/VSTOL is also possible.

Straight VTOL is almost never done due to fuel considerations.

With system ships, decks (such as they are) are generally perpendicular to the thrust axis of the ship, but given that the ship spends a great deal of time coasting in freefall, spinning sections called "centrifugal artificial gravity decks" (also known as "grav decks") are often included in the design.

Chemical-drive ships of any size can be constructed at Ship Construction Centers of any size, as well as at Docking Stations (as described in Zebulon's Guide to Frontier Space).

Chemical Drives are the cheapest and simplest spaceship engines.[7] They work by igniting a chemical fuel, and propel the ship with the force of the exhaust. Liquid or solid oxygen must be carried by the rocket. Chemically driven ships must carry a lot of fuel, and cannot accelerate long enough to achieve interstellar speeds.

Any hull that is outfitted with chemical engines must have a full complement of engines for that hull. For example, a ship with a hull size of 13 needs four chemical engines. These engines are mounted at the tail of the ship, instead of away from the ship on struts.

All ships with chemical engines have an ADF of 1.[8]

Ships using chemical drives burn a load of fuel on every voyage, as a general rule. The cost of one load of fuel is 250 Cr x the hull size of the ship for each engine. This is doubled for shuttles when they are taking off from a planet, because of the extra thrust required to escape the gravity well.

If a chemical drive System Ship is being used on a long voyage and the crew wishes to conserve fuel, the referee may allow the players the option of traveling very slowly (a mere 10,000 km per hour or so [9]). They may then be allowed to make a return trip with the same load of fuel they started with.

A ship with chemical drives must continually accelerate through the atmosphere to reach the speed[10] necessary to escape the planet's gravity. The ship will increase its speed by 200 meters per turn (six seconds) while it is lifting off. This is a fairly accurate abstraction of actual lift-off speeds.

The speeds a ship will have and the distance it will travel after various numbers of turns are shown on the Lift-off Table:

Once the ship gets beyond the reach of anything on the ground, these calculations are not necessary. For the referee's information, though, the ship will continue to accelerate until it reaches a speed of 60,000 meters/turn,[11] after 30 minutes of acceleration. At this point, it can escape a planet with 1g of gravity and soar into space.

Because these engines are simple and easy to build, the cost is the same at all construction centers.

Note that fuel costs are doubled when taking off from a planet.

Note that only HS 5 ships are capable of making planetfall. Taking off from a planet’s surface doubles fuel costs.

Retrieved from "https://starfrontiers.fandom.com/wiki/Chemical_Drives?oldid=11639"
Community content is available under CC-BY-SA unless otherwise noted.