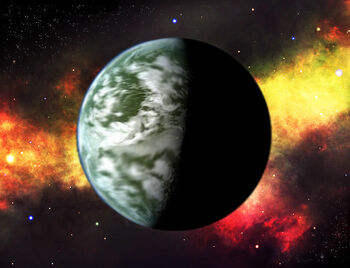 Humans were the primary settlers on Clarion in centuries past. As they expanded from the direction of Theseus, the White Light system became a major crossroads for human exploration of the Frontier. Because it sits astride a connection of four major interstellar routes, Clarion has collected significant populations of all of the Four Races.

No native animal life has been discovered on Clarion. Much of the planet is covered with vegetation, but all of the plants would be considered "primitive" by most standards. Lichens, mosses, algae and ferns are the most common types.

Clarion is a flat, wet world. Most of the surface is covered by a large land mass that is broken by eight seas and a number of huge lakes. A few low mountain ranges have risen above the surface, but most of Clarion is covered by broad plains and mudflats, the largest of which are thousands of kilometers in diameter.

The normal weather on Clarion is rainy. Storms can last for weeks.. Generally, they are punctuated by brief periods of fair weather before clouds collect and the showers begin again. At any one time, rain will be failing over 90% of the planet.

A concerted effort is being made to terraform the planet by reducing carbon dioxide and increasing nitrogen levels in the atmosphere. Early efforts were powered by petrochemical derivatives, which proved inadequate for the task.

Fission power, combined with grass and algae seeding, bacterial engineering, and the introduction of genetically engineered animal species (insects, fish and various forms of aquatic and subterranean invertebrates) has had positive results in increasing nitrogen and decreasing CO2 levels in the atmosphere, which has garnered the attention of environmental groups throughout the Frontier.

Clarion is ruled by a capitalist monarchy which has traditionally enjoyed wide support from the population. The current king, Leotus XIX, has ruled for 37 years and soon will no doubt abdicate in favor of his daughter, Leotia XX. The Leotus line has held the throne for nearly 400 years, always passing the crown from parent to eldest child.

Visitors from other systems sometimes refer to Clarion as "Gollywog". The name is regarded as an insult by most residents of the planet, and its use has been known to provoke violence from otherwise peaceful citizens.

The population of Clarion is centered in 12 great cities, each with a population measured in tens of millions. The largest city on the planet is Valentina, where the incredible palace of the Leotine rulers sprawls over dozens of square kilometers.

All buildings on Clarion are environmentally sealed due to dangerously high levels of CO2 in the planet's atmosphere. Access to building exteriors is via airlocks, and most buildings are connected by either underground passages or covered corridors. Parks, farms, and communal areas (often found between adjoining buildings) are covered with huge plexiglass domes meticulously maintained by computer-controlled robots.

The majority of buildings on the planet are covered in genetically-engineered vegetation (part of the terraforming effort, see below), which combined with the penchant for building "up-and-out", gives the illusion that there are very few settlements of any size; only a few domes and short buildings built on hills and mountains. Since most outsiders only see the magnificent city of Valentina, few understand how it is possible that this planet maintains a "heavy" population rating.

Valentina includes the headquarters of the surface-based planetary militia, the Royal Guards. This militia numbers only a few thousand men, yet it has never been defeated in any land combat fought throughout the planet's generally peaceful history.

Wheeling majestically through space, hundreds of kilometers above the planet's surface are the Clarion Stations. Fortress Redoubt, a major UPF base, is the largest. The others include Clarion Station, a large commerce station which also serves as the Clarion Royal Marines primary base of operations, a Class III spaceship construction center, and a half-dozen smaller research and observation stations.

Trade with other systems is encouraged, and is profitable enough that most merchants do not mind the high tariffs assessed to all imports. Companies working on the planet's surface must demilitarize all operations, and this has contributed greatly to the state of perpetual peace that the planet has known.

There are a few agents of unrest, however. Leotus rules the planet through an elected parliament of 100 seats. Although 70 to 80 of these seats consistently support the king in all decisions, the remainder of the seats are held by the Liberation Party, which wishes an end to the monarchy. The Liberation Party is rumored to support some of the pirate bands that are known to lurk in White Light's asteroid belt. The pirates also are reported to be receiving aid from the Streel Corporation, which was banned from operations on Clarion for 20 years following violations of the Demilitarization Act.

Only eight years remain in this sentence, but already the rumors of subversive Streel activity are common. There also are reports that Streel is a heavy contributor to the coffers of the Liberation Party. Because of the UPF charter, the sentence against Streel does not extend into space, so the corporation has an office on Clarion Station.

Clarion's primary industry is resource exploitation. The resources that have made Clarion wealthy include: uranium (found in all of the mountain ranges), a few rich collections of bauxite (aluminum) ore, and huge amounts of petroleum beneath the mud flats. The largest industry on the planet is petroleum refining. While there is very little demand for burnable by-products of petroleum in the Frontier, the variety of plastics created from oil are in great demand.

Clarion exports raw materials to Kdikit, Minotaur, and Lossend. It imports 40% of its industrial products from Lossend; 20% from Minotaur; and 10% from Triad. Agriculturally, Clarion obtains 30% of needed foodstuffs from Kdikit; and 10% from Ken'zah-Kit.

When Star Frontiers was originally published, the planet was called Gollywog, but in later books it was retroactively renamed Clarion with "Gollywog" being noted as an offensive nickname. Most fans where oblivious over the reason for the name change, and it was generally assumed the staff at TSR thought it as a silly name to begin with.

In truth, a "Gollywog" is an obscure black-face doll form England, based on an old children's book series. Beyond the "black-face" meaning, "wog" is also a racial slur in the U.K. - the equivalent of the U.S.'s "N-word". Whatever the name was deliberately chosen or not remains a mystery, but it was apparent that TSR found out the meaning and took steps to change it.

Retrieved from "https://starfrontiers.fandom.com/wiki/Clarion_(Gollywog)?oldid=10849"
Community content is available under CC-BY-SA unless otherwise noted.