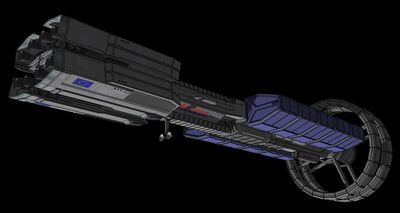 Colony Ships, also known as Colony Transports or (derisively) Colony Liners, are large interstellar spacecraft designed to carry large numbers of colonists to their new home, along with all the equipment required to get a colony started or continue an ongoing colonization process; this includes heavy industrial and agricultural machinery, prefabricated buildings, Power Generators, and enough equipment and supplies to survive for several months, until one or two harvests have been completed.

The ships themselves are often built with specific needs in mind, but always include several Shuttles and large numbers of accommodations for the colonists, along with massive cargo holds. Often, a colony ship will carry the core of a prefab space station, with additional components arriving with subsequent colony ships. Other times, the colony ship itself serves as a temporary orbital station until relieved. Some colony ships even include some hydroponic agricultural capability to sustain the early stages of the colony.

The number and manner of travel of the passengers depends a lot on the number of jumps required to reach the world and the colony building method used; long-range drop colonies may carry thousands of colonists in “storage berths”, while single-jump fast-period seeding colonies might carry a few hundred colonists in journey-class quarters.

Colony ships almost never carry exploration equipment (beyond personal equipment of the colonists), as preliminary exploration and colony site selection will have been done by exploration ships and colony organizers, but videocom and subspace radios are always included, as are simple weather satellites (assuming that a station is not included).

Older colony ships use ion drives for propulsion almost exclusively, although that has been changing, as newer designs take advantage of the space freed by the fuel requirements of atomic drives.

Surprisingly to many, the shuttles carried by colony ships often use atomic engines to save on fuel weight during the many transatmospheric flights to the colony site and back.

Retrieved from "https://starfrontiers.fandom.com/wiki/Colony_Ship?oldid=13651"
Community content is available under CC-BY-SA unless otherwise noted.