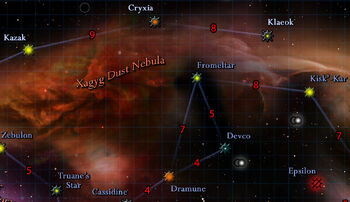 Cryxia is a Class K5 (orange) star and is part of the Rim Coalition. It has two habitable planets: Pi'Ka'Nair, and T'zaan.

Part of the Far Rim Passage, Cryxia is considered the "First of the Far Rim Colonies". Only two commercial routes serve the system, but many explorers seek the mythical "Cryxian Passage" through the Xagyg Dust Nebula to Fromeltar, a world with which it maintains near constant Subspace Radio communication.

Retrieved from "https://starfrontiers.fandom.com/wiki/Cryxia?oldid=13532"
Community content is available under CC-BY-SA unless otherwise noted.