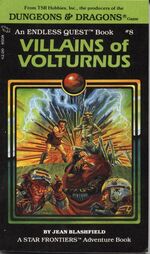 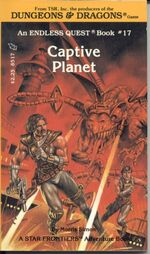 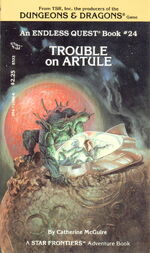 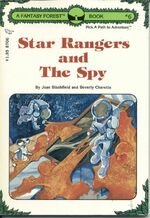 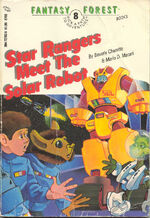 The Endless Quest books were two series of gamebooks released by TSR. These books were the result of an educational department established by TSR to develop curriculum programs for reading, math, history, and problem solving. The first series of 36 books was released from 1982 to 1987, the second series of 13 from 1994 to 1996. These were respectively the first and last gamebooks released by TSR. A short spin-off series of four Endless Quest: Crimson Crystal Adventures books (aimed primarily at young girls) were also released during 1985. There were also several series of similar books that did not bear the Endless Quest brand.

The mechanics of these books involved simple choices in the style of Choose Your Own Adventure books, rather than the game-like randomized elements of Fighting Fantasy gamebooks. However, the stories and characters in an Endless Quest book, while not necessarily more complex than in a Choose Your Own Adventure book, are often more fully developed because the Endless Quest books are much longer; for example: the character referred to as "you" in the text almost always has a name, gender, and backstory; the result is that the books in the Endless Quest series resemble miniature novels with many different endings.

Retrieved from "https://starfrontiers.fandom.com/wiki/Endless_Quest_Books?oldid=12687"
Community content is available under CC-BY-SA unless otherwise noted.