Explorers are heavy, four-wheeled vehicles built to cross rugged terrain in remote areas. Highly maneuverable and reliable off-road transports, each wheel has its own motor, and their extra-wide tires make them very stable. Explorers are air-tight and have a retractable rudder so they can cross open water; however, care must be taken because they can be capsized by high waves.

Although explorers are sold unarmed and unarmored, it is not unusual for owners to install aftermarket systems. Aside from weapons and communications gear, the most common additions to an explorer's inventory are at least one survival kit and a toolkit (sold separately). 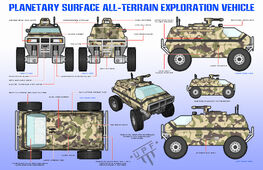 On most civilized worlds, operating a combat-modified explorer without the proper permits is illegal. Local authorities (police and militia), corporate security, and UPF ground forces use militarized explorers as combat vehicles for patrols, escort missions, and other specialized roles.

An explorer can be fitted with a vehicular turret of any size, up to 15 coats of armor (5 for concealed coats), and up to twelve slots for vehicle-mounted weapons.[1] Each coat costs 7,000 Cr (this includes reflective coating), or 9,000 Cr for concealed coats. Screens, such as Albedo or Inertia, are powered by an econopack (250 SEU, 25kg, 1250 Cr) and require assorted systems and adapters that cost 15,000 Cr.

No-frills Explorer
Add a photo to this gallery

Retrieved from "https://starfrontiers.fandom.com/wiki/Explorer?oldid=10597"
Community content is available under CC-BY-SA unless otherwise noted.