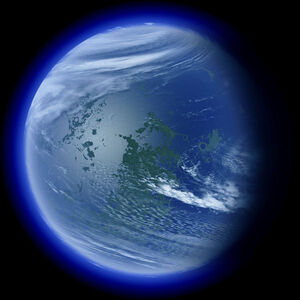 Widely considered the "gateway to the Rim", Faire is a planet in the Capella system, reached through the Capellan Pass from Zebulon. Few spacers from the frontier sector ever travel beyond this system, since the Capellan Free Merchants control most interstellar trade in The Rim.

This world was originally colonized by the Ifshnit, but has since attracted settlers of all known Rim and Frontier races.

The planet's oceans are rich in life, from unicellular algae and plankton to deep ocean predators. There is no native life on the land masses beyond coastal algae, though invasive grasses have since colonized most undeveloped terrain.[1]

It is a watery world with five large islands as its only land masses. Each of these islands has a large bazaar area and innumerable corporate showrooms. This world is moderately populated.

This planet has two moons - Astraa, which is primarily used for agriculture, and Flaund, which is not colonized.[2]

Faire is the economic hub of the Rim, and the home of the Capellan Free Merchants, at Red Island. It is said that anything can be purchased on Faire... for a price.

The second largest continent on the planet is called Bizarre.[3] The planetary capital is the city of Minzii,[4] on the continent of Bizarre.[5]

Retrieved from "https://starfrontiers.fandom.com/wiki/Faire?oldid=13472"
Community content is available under CC-BY-SA unless otherwise noted.