Fleet Carriers are larger versions of assault carriers (hull size 18-20) developed after the Second Sathar War. Designed to carry large numbers of fighters and bombers, the fleet carrier has the ability to launch devastating attacks from a great distance. Most fleet carriers are lightly armed, as they rely on their escorting vessels and payload of fighters to defend them against attack.

In addition to its normal cargo capacity, a fleet carrier can hold over 16 fighters. 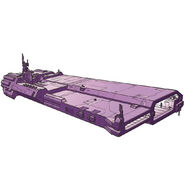 Human Fleet Carrier
Add a photo to this gallery

(material based on Richard Baker's Warships text for Alternity, and D20 Future)

Retrieved from "https://starfrontiers.fandom.com/wiki/Fleet_Carrier?oldid=13672"
Community content is available under CC-BY-SA unless otherwise noted.