Frigates are the smallest of the "full size" (that is, capital) Spacefleet vessels. They are commonly used as high-speed patrol craft by the UPF, as they are well-armed enough to handle most pirate ships and other criminal vessels.

Frigates can make up to three jumps before needing an overhaul. These warships are the mainstay of the UPF fleet.

The Z'Gata-class and Driadia-class Frigates are both old classes of light warships that predates the UPF. They are not that that powerful, nor fast compared to other frigates. The difference between both classes, is that the Z'Gata mounts two additional sets of ICMs.

The first class of Frigate built for Spacefleet has no official name (see page 7 of the UPF Tactical Operations Manual). It is similar to the Z'Gata, but featuring a racket battery and masking screen system. It is not known to how widely used this class was, as the rulebooks are ambiguous at times. It can be assumed that this is the default for unstated (no stats given) Frigates.

The newest generation of Frigates started with the Flying Cloud-class, followed by the highly popular Shimmer-class. The Flying Cloud is armed like it's predecessor, but sports stronger thrusters. With the inclusion of masking screen systems, the Shimmer-class was born. By replacing the torpedoes with an extra rocket battery and two additional ICMs, the Daring-class was born.

The frigates used by the Sathar at one time could outperform older UPF frigates, but the Sathar have not updated their frigates, and now they are out-classed by the newer generation of UPF frigates. The Stinger — a classification coined by the people of the Frontier Sector — is the oldest known class of Sathar frigates. The Raptor-class frigate gets an extra torpedo and masking screen charge. The latest class cuts back on the masking screen down to one charge, but also add a laser battery and two extra ICMs. This unnamed class of frigate is equal in firepower to it's unnamed UPF equivalent.

(* unofficial names from The Star Frontiersman)

Various Frigate classes of the Frontier 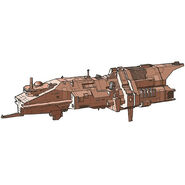 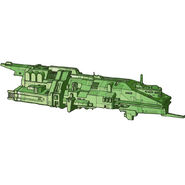 Human Lightning-Class Frigate
Add a photo to this gallery
Retrieved from "https://starfrontiers.fandom.com/wiki/Frigate?oldid=13942"
Community content is available under CC-BY-SA unless otherwise noted.