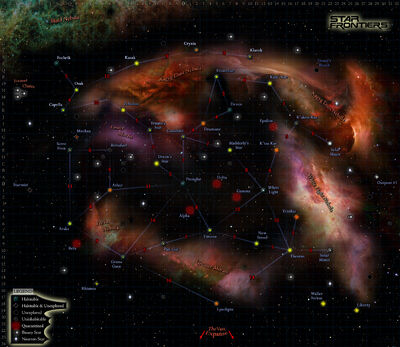 STAR FRONTIERS adventures take place in an area of space called the Frontier Sector, or simply the Frontier.

The area lies in what is known as a "stellar nursery", a vast nebula left behind by the massive supernova of an enormous ancient star whose remnants have formed the core of the region and Rim sectors still dominates the skies in all Frontier worlds; the Xagyg Dust Nebula, White Light Nebula, Yreva Nebula, Greater Morass and Lesser Morass are all remnants of the same nebula, now separated by the spaces left behind by the formation of newer stars and the existing star systems.

The Frontier contains 17 inhabited star systems, with a total of 23 colonized planets. Some of these planets have been claimed and settled by only one of the four races while others were set up in cooperation and have mixed populations.

The Frontier is home to at least 17 indigenous sentient races/species.[1]

Besides these settled areas, the sector contains 21 unexplored star systems that could have habitable (or inhabited) planets. There are many moons, asteroid belts and uninhabited planets that are largely ignored in the day-to-day business of earning a living in the Frontier.

The Frontier is bordered on the "north" by the Rim Coalition. The region "south" of Frontier space is known as the Vast Expanse.

Retrieved from "https://starfrontiers.fandom.com/wiki/Frontier_Sector?oldid=12112"
Community content is available under CC-BY-SA unless otherwise noted.