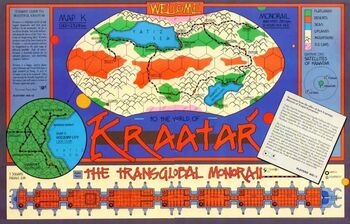 Gozzorf is the capital of Kraatar. The headquarters of Ral'Ik'Ka (RIK), Sik'Triksta (ST), and Vist'Lat (VL) trade houses are located here. Population of approximately 1 million (divided more or less evenly between Human and Vrusk, with most of the small Yazirian and Dralasite population of the planet) and is the largest settlement on Kraatar. It was here that the first Human settlers landed, and is still the site of the planet's only spaceport (Gozzorf Starport). Gozzorf University, which provides higher education for free to all natives of the planet, is also located here. A monorail run by Sik'Triksta trade house links all areas of the city (as well as the transglobal lines which link most of the cities on Kraatar). Gozzorf is zoned into a number of districts, connected by monorail and roads: Jedsis, Business District, Industrial District, Pstriztz'kipur, and Fioust.

Jedsis is the name of the area containing the spaceport and is home to numerous transients, plus indigenous Humans and Vrusk who have opted to stay outside mainstream Vrusk society.

The Business District is located on the shores of the Yatiz Sea and includes numerous shopping plazas, several well-appointed hotels and important office buildings. Most Vrusk trade houses have their offices here. The district is usually crowded with Vrusk and Humans.

Industrial District: The majority of factories and warehouse are located here. A small number of workers actually live here, but most Vrusk and Human workers commute here every day on the monorail.

Pstriztz'kipur is where the majority of the Vrusk executives live. It is a beautifully ornamented area. Open parklands and gardens are common, and its wide boulevards are lined with statues and sculptures pleasing to the Vrusk. In times of unrest this area may be out of bounds to anyone who does not have an entry permit.

The majority of Vrusk and Human workers live in Fioust. Although not as picturesque as Pstriztz'kipur, Fioust is still a pleasant area. Most of the workers live in three-story houses.

Retrieved from "https://starfrontiers.fandom.com/wiki/Gozzorf?oldid=13852"
Community content is available under CC-BY-SA unless otherwise noted.