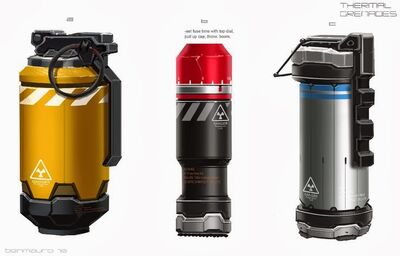 Cryo Grenade (optional): An exploding cryo grenade scatters sticky, freezing liquid (commonly liquid nitrogen) across everything in the blast radius. A cryo grenade causes 4d10 points of damage on the turn it explodes. The freezing liquid sticks to the victim, causing an additional 1d10 points of damage on the second, third and fourth turns after the explosion. A character that passes a Reaction Speed check takes only half damage. Anyone in a spacesuit takes no damage from a cryo grenade.

Doze Grenade: A doze grenade releases a cloud of fast-acting knockout gas. All creatures within the blast radius will fall asleep for d100 turns unless they pass a current Stamina check. A shot of stimdose will revive a sleeping individual immediately. The doze gas is effective only on the turn that the grenade goes off.

Fragmentation Grenade: When a fragmentation grenade explodes it thows hundreds of small, sharp pieces of metal in all directions. Fragmentation grenades are commonly called frag grenades. Any creature or character in the blast radius suffers 8d10 points of damage. This damage is cut in half if the individual passes a Reaction Speed check. Inertia screens and skeinsuits also reduce damage by half. All of these modifiers are cumulative.

Incendiary Grenade: An exploding incendiary grenade scatters sticky, flaming liquid (commonly napalm) across everything in the blast radius. Incendiary grenades are commonly called fire grenades. A fire grenade causes 4d10 points of damage on the turn it explodes. The burning liquid sticks to the victim, causing an additional 1d10 points of damage on the second, third and fourth turns after the explosion. A character that passes a Reaction Speed check takes only half damage. Anyone in a spacesuit takes no damage from an incendiary grenade.

Poison Grenade: A poison grenade releases a cloud of poisonous gas. Anyone in the blast radius will be poisoned by the gas. The gas is effective only on the turn the grenade explodes. The gas acts as an S5/T10 poison. A character who passes a current Stamina checkwill not be affected, nor will anyone in a gas mask. A shot of antitox will neutralize the poison so that no further damage is taken.

Smoke Grenade: A smoke grenade produces a thick cloud of smoke that both blocks vision and acts like tear gas. Smoke grenades are available in colors so they can be used as signals. Anyone in the blast radius on the turn the grenade explodes must make a current Stamina check. If the character fails the check he has a -10 modifier on all ability checks for 1d10 turns, due to coughing and blurred vision. The smoke will continue to spread 3 meters/turn for five turns, when it will cover an area 30 meters in diameter. The smoke cloud gives soft cover to anyone behind it or inside it. The smoke screen will last for 10 minutes.

Tangler Grenade: An exploding tangler grenade throws out hundreds of strong, sticky polymer threads. These threads stick to everything within the blast radius. An entangled individual can not move until the threads decay (in 30 minutes) or until solvaway is spread over the threads. Any creature with more than 100 stamina points can break out of tangler threads in one turn.

Retrieved from "https://starfrontiers.fandom.com/wiki/Grenades?oldid=12417"
Community content is available under CC-BY-SA unless otherwise noted.