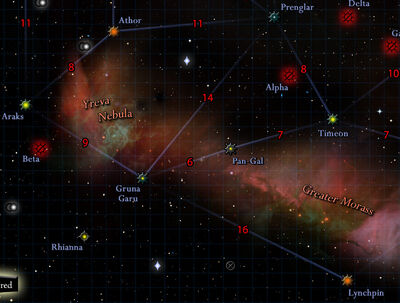 Gruna Garu is an inhabited star system in the Frontier Sector. It is a G8 star orbited by one habitable planet - Hargut.

During the Alpha Dawn era, Gruna Garu was among the most remote systems in the Frontier, reachable through the longest subspace route in the Frontier at that time.

Over the years, two additional routes were opened, making the system a key node in the region.

Retrieved from "https://starfrontiers.fandom.com/wiki/Gruna_Garu?oldid=13538"
Community content is available under CC-BY-SA unless otherwise noted.