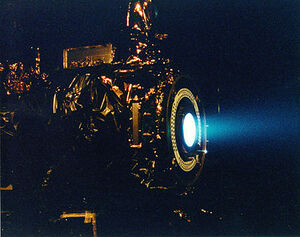 Ion drives are, by far, the most common and practical method of reaching Void velocity, crossing the Void and decelerating at the destination system. Unlike real-world ion drives which require long acceleration before useful velocities can be attained, ion drives in the Frontier are capable of massive thrust over extended periods of time, exceeded only by atomic engines.

The Ion engines work by ionizing (electrically charging) particles of fuel and launching them at relativistic speeds out the business end of the drive. Through the use of advanced technology, this thrust is collected and concentrated, resulting in 1 g acceleration (half that with alternative fuels) capable of reaching void velocity in under 5 days.[1]

Ion engines are never used within an atmosphere due to the interaction of the engine's particle stream thrust and atmospheric particles surrounding the ship, which can easily damage the hull and provoke an explosion.

Ion drive fuel can be just about anything, but the standard substance is hydrogen. Other forms of matter may also be used as fuel, even rocks and junk. All fuels other than hydrogen will provide the ship with an acceleration of only ½.[2]

Accelerating at 1 g, each engine consumes 1,113 fuel units of Hydrogen per engine per jump. Fuel costs are higher than in a comparable atomic-drive ship, (10 Cr per fuel unit = 11,130 Cr/engine/jump), but the ability to use alternative fuels for half the acceleration over double the time[3] AND with no need to overhaul each engine after every 1, 3 or 12 jumps, ion drive ships are more economical to use in a wide variety of commercial applications.

Each Ion Engine can carry up to 10,000 units of fuel internally.[4] Cargo space within the ship can also be devoted to fuel, above and beyond that carried in the engines.[5]

Ion engines operate on the same principle as particle beam weapons, such as a proton or electron beam battery. Charged particles are released from the rear of the engines at tremendous velocity. Even though the particles are extremely small, there are enough of them to provide a ship with a steady and long-lasting thrust. Ion drive engines require very little fuel.

Ion engines must be mounted on struts, away from the hull of the spaceship. Any ship equipped with ion drives must have the full complement of engines for that hull size in order to accelerate and decelerate normally. The ADF of a ship with ion drive always is 1.

Ion engines work by ionizing (electrically charging) particles of fuel. This fuel can be just about anything, but the standard substance is hydrogen. If characters are stranded in an asteroid belt with an ion-driven ship, however, they could crush up the rock of the asteroids to use for fuel, or basically use any kind of junk that they can find. All fuels other than hydrogen will provide the ship with an ADF of only ½.

Hydrogen can be purchased at all SCCs for a cost of 10 Cr per engine per ADF point used. For example, a ship with two ion engines embarks on a voyage with 8 units (8 x 10 = 80 Cr worth) of hydrogen. The ship accelerates to a speed of two hexes per turn, which uses two ADF points. Since both engines burned the fuel, however, this means that four units of fuel have been used. The ship now has just enough fuel to use two ADF points per engine to decelerate at its destination.

A ship with ion drives can carry a tremendous amount of fuel, if necessary. Up to 10,000 units can be stored in each engine. This can be increased if the crew makes a few modifications to the ship's storage areas.

Due to different capabilities, ion drives have different costs depending on the construction center used.

Retrieved from "https://starfrontiers.fandom.com/wiki/Ion_Drives?oldid=9470"
Community content is available under CC-BY-SA unless otherwise noted.