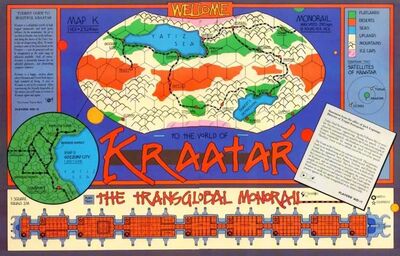 Kraatar is the only habitable world in the Tristkar system. It is lightly populated, primarily inhabited by vrusks and humans. Kraatar's economy is mixed with agriculture, industry and high-tech all playing a role. It has a light atmosphere and gravity (0.6 g's) and a relatively short day lasting only 18 standard hours. While there are no space stations in orbit, two uninhabited moons - Tivalla and Setarz do circle the planet.

Kraatar is a small world covered by rugged, mountainous uplands and desert plateaus where the atmosphere is too thin to be breathable. Only in the lowland depressions (flatlands) scattered around Kraatar's temperate zones is the air dense enough to breathe, and only here are there rivers and lakes. Kraatar was first settled by human colonists from White Light in PF 86.

Kraatar lies in a close orbit to the star Tristkar and has a thin atmosphere. Water covers only 20% of the planet and there is very little cloud cover. Being near the inner edge of the system's life zone, Kraatar receives large amounts of stellar radiation. As a result, deserts occupy most of the equatorial zone of the planet. Temperatures at the equator range from 0 to 60°C

The majority of Kraatar is covered by high altitude deserts and jagged mountain ranges rising up to heights of 10,000 meters. The atmosphere in the mountains is too thin to breathe without the aid of breathing apparatus, but numerous 'flatlands' exist around the planet, many of which are below sea level. These areas are very fertile and have a sufficiently dense atmosphere here to allow the various races to breathe without assistance.

However, the air is not as dense as most newcomers are used to, and persons attempting any strenuous activity (e.g. running, climbing or fighting) will lose 1 point of Stamina every 10 minutes. If Stamina reaches zero, they will fall unconscious for 1d10+10 turns. For each turn of rest, they can regain 1 point of Stamina lost this way. Natives of Kraatar are not subject to these effects, but even they cannot function in the mountains without breathing apparatus, where unprotected persons lose 1 point of Stamina per turn until dead.

The first human colonists landed at Gozzorf, on the shores of the Yatiz Sea in PF 86. Soon small communities were established here, at Quazzt's Depression, and in the other flatlands. Searches were made in the planet's mountains for heavy metals, but no rich deposits were found, and only a few iron and copper mines were established.

Isolated in their communities, many of the colonists took to a quiet life, tilling the land for crops and herding the few imported animals. As the years passed, the colonists lost many of their technological skills, and as machines wore out, they were unable to replace them. Gradually they were reduced to a simple, self-sufficient existence where high technology was a thing of the past.

Few ships visited Kraatar until FY69 when the computer of a vrusk trade ship suggested Kraatar as a "world suitable for commercialization." After a hesitant meeting, the two races struck up a rapport and the vrusk traded technological hardware for agricultural produce. The vrusk left Kraatar, only to return later with more machinery to trade with the humans.

Equipped with the latest farm machinery, the humans were able to increase production and buy more vrusk goods. Soon vrusk ships were flocking to Kraatar. Many came to trade, bartering up-to-date equipment for agricultural products, but others brought settlers and with them vrusk trade houses eager for new markets. The trade houses began to establish manufacturing plants and to conduct comprehensive surveys of the planet.

This research revealed that the sands of Kraatar's deserts could provide an ideal source of silicon for computer manufacture, as well as for producing some of the most beautiful glass ever seen by vrusk. If cut and polished, the glass scintillates and sparkles with all the colors of the rainbow.

Soon Kraatar glassware was sought by vrusk art lovers all over the Frontier, and rapidly became one of Kraatar's major exports. At the same time, the two seas were discovered to be rich in mineral deposits. As news of these finds spread, more vrusk trade houses came to Kraatar to exploit its new-found wealth.

In the early years, both races benefited from these developments. The humans were supplied with much-needed technology, and the vrusk had markets both on and off-planet with which to enrich themselves. The trade houses established hospitals and a university at Gozzorf. They discovered the remains of the original human settlers' ship and set about restoring it. It would never fly again, but it was lovingly rebuilt by the vrusk with a museum around it to honor the humans on Kraatar and to display vrusk art collections.

As more farm machinery became available, fewer humans were needed to work the land, freeing them for other activities. Many of them journeyed to the towns and cities where they found employment in vrusk electronics, glass and metal-extraction factories. Many others found work building the monorail which now circles the planet.

It was in the factories that dissension first grew among the humans who were unable to cope with an urban lifestyle. As the vrusk became more established, more of their racial beliefs were introduced. To a vrusk it was second nature to allow a trade house to determine one's life but, to many of the humans of Kraatar, this was abhorrent. Used to a pastoral existence, with order imposed only by the seasons, many humans refused to accept the full ramifications of vrusk society.

Dissatisfaction was first shown in a desire to return to the land, but vrusk technology had changed the world. One machine could now easily do the work of over a hundred laborers. Return to the old farming techniques was impossible. Humans now relied too heavily on vrusk technology to maintain their farms and standard of living any other way.

Unable to return to the farms, most humans adjusted to their new lives and accepted the presence of the vrusk as employers, but attempts to impose vrusk cultural beliefs were not very successful. Few humans adopted vrusk company names, and attempts by vrusk executives to instill in humans the vrusk sense of belonging to a trade house met with little success.

Many vrusk executives were confused by these reactions; they saw the situation as one of mutual interdependence - the good of the trade houses was the good of all, humans and vrusk alike. The trade houses offered medical, educational and recreational facilities to both their vrusk and human workers. Surely this was the road to harmony and prosperity for all?

Yet many humans insisted on moving from one trade house to another, requiring new housing and causing disruptions in daily life and production. To help with this clash of cultures, many vrusk trade houses have employed human advisers in an attempt to sort out the problems as equitable as possible. For years it looks as though this approach was working; vrusk and humans began to work closely together and all benefited.

However, some humans were determined to stop their fellows becoming ever more vrusk-like, and 30 years ago the Kraatar Liberation Corps (KLC) was founded.

The ruling body of Kraatar is a syndicracy called the Commercial Council. The Council is responsible for off-world relations, and major policy decisions concerning Kraatar, but is primarily concerned with coordinating the activities of Kraatar's trade houses.

The Council is made up of representatives from Kraatar's trade houses. Each major trade house has a representative while the lesser ones share one representative between them on a rotating yearly basis. Local governance on Kraatar is mostly left up to trade houses or human regional governments for more specific laws, but is still subject to the Commercial Council.

Trade houses are as common on Kraatar as they are wherever vrusk are found in the Frontier. Six major trade houses exist on Kraatar, as well as hundreds of smaller ones.

(CR 3) All weapons other than pistols or melee weapons are illegal. Persons found in possession of other weapons will be arrested, have their weapons confiscated and be fined a minimum of 500 Cr. The Commercial Council has contracted the RIK trade house to act as Kraatar's police force.

Cities are connected by the Kraatar Transglobal Monorail.

Retrieved from "https://starfrontiers.fandom.com/wiki/Kraatar?oldid=13492"
Community content is available under CC-BY-SA unless otherwise noted.