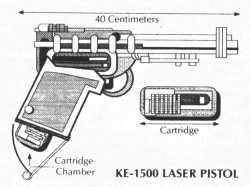 The Ke series represents the latest generation of laser weapons. Their beams are a bright orange. The Ke-1000 is a small pistol version, the Ke-1500 is a 40-cm-long pistol, the Ke-2000 is a standard rifle, and the Ke-5000, which has recently been released, is a larger version that is powered by a 100 SEU pack or parabattery and is usually mounted on a vehicle, defensive position, or field mount (though a character with great strength can use it like a rifle to defend himself in times of dire need). Albedo suits and screens still defend against laser weapons.

Retrieved from "https://starfrontiers.fandom.com/wiki/Laser_Weapons_(KE-Series)?oldid=9010"
Community content is available under CC-BY-SA unless otherwise noted.