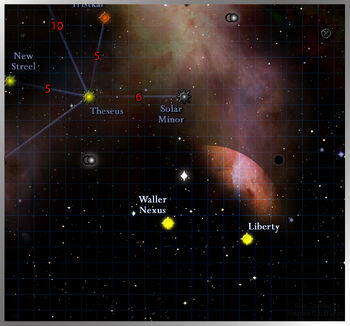 Liberty is a G1 star system. The system was previously known as Federation Survey 30. The planet Snowball orbits Liberty. On a closer orbit to the star is an uninhabitable planet known as 30.1 while the outer orbit of the star contains a thick asteroid belt.

A recent discovery, Liberty is serviced by only one military/exploration route not yet opened to commercial transports.

Retrieved from "https://starfrontiers.fandom.com/wiki/Liberty_(system)?oldid=13566"
Community content is available under CC-BY-SA unless otherwise noted.