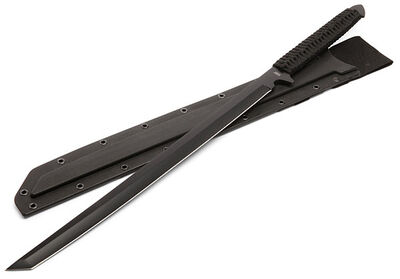 A machete is a large cleaver-like knife used primarily as a tool and as a weapon in a secondary capacity. The blade is typically 32.5 to 45 centimeters (12.8 to 17.7 in) long and usually under 3 millimeters (0.12 in) thick.

Described as: "A shortsword used for chopping through soft jungle undergrowth or grass", a machete is as effective in combat as a sword and is often included in emergency survival kits.

Under the Alpha Dawn rules, a machete costs 30 Credits and weighs 3 kg, delivering 3d10 points of damage (with a +10 modifier), countered by inertia-class defenses.

Under the Zebulon rules, cost and weight remain the same, but maximum damage becomes 20 (with a +2 column modifier).

Retrieved from "https://starfrontiers.fandom.com/wiki/Machete?oldid=8892"
Community content is available under CC-BY-SA unless otherwise noted.