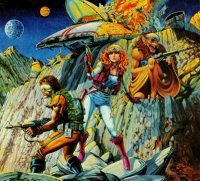 At the moment, much of this wiki is still under construction. This project is looking for art, articles (homebrew material and original canon), and plenty of editors/programmers to help better itself.

To make it easier to navigate, this table lists the prominent categories on this wiki. As this site is under major renovation, this list is subject to change.

Please Read... Featured content on this wiki will be voted upon by the users. If you have any featured content that you wish to see voted on please submit it to this page. We will do this every month or every other month to help keep the Main Page looking its best.

This wiki features a wide range of useful templates. Templates are pre-coded tables that allow editors to write out stats without having to create a table/info-box each time. Here are stats for: Creatures, Robots, Planets, Races, Spaceships, Stars, Vehicles and Weapons.

One of the key templates used on this wiki are special headers used to divide pages into topics and sup-topics. There are currently two headers: Header-A and Header-B.

This site is working on two large maps with keys. They include the Classic Map, and the Current Map from Zebulon's Guide.

Star Frontiers on the Web

Every month there will be a featured Star Frontiers website that will be featured in this section of the wiki. The point of this section is to increase SF gamers' knowledge of the online communities available to them.

History: The Dramune System was first colonized in 302 PF by the Dralasites, whose race expanded in the Frontier from the direction of Fromeltar. Within several decades of the founding of the first settlement, members of all four races were living on both Inner and Outer Reaches.

At first the two planets developed in peaceful harmony. Trade flourished between them, as this is one of the few systems having more than than one habitable planet, and cheap system ships could be used for commerce. After several centuries, however, philospohical differences began to seperate the two societies. The dramatically different living conditions on the two planets caused them to develop along dissimilar paths, creating one of the most bitter and long-standing conflicts on the Frontier Read more here...

Retrieved from "https://starfrontiers.fandom.com/wiki/Main_Page?oldid=13870"
Community content is available under CC-BY-SA unless otherwise noted.