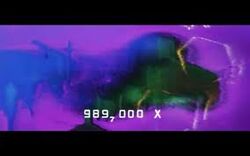 The Matrix is an organic, semi-intelligent gas-like substance found in the gas giant Venturi, in the Belnafaer system, that could possess machinery.

NOTE: This article contains major spoilers to the adventure module Bugs in the System.

The Matrix was unknowingly discovered by the crew of the research/mining vessel ByChem Moneyspider, after an orbiting extraction platform on Venturi called Jetsom experienced massive amounts of technical difficulties that would eventually doom them. Its name was given by Technician Akord Zon of Jetsom Team Alpha, who noted her finding (including a way to contain it) on a computer before she succumbed to radiation poisoning.

The Matrix was pulled from the gases that form the gas giant Venturi, and was thought to be naturally occurring forms of rare gases, but was actually an organic, gas-like substance that by itself was mostly inert, but in concentration, possessed some degree of intelligence and the ability to control machinery, such as computers, robots, and other electronics.

Initially, it doomed the Jetsom crew as it did not know better - it was like a child in a strange environment and lashed out the only way it could. Based on Akord Zon's notes, the rescue team did their best to purge Jetsom of the Matrix, but in the end only delivered it to Moneyspider.

When it arrived at Moneyspider, it found an android body, grew in intelligence and considered the crew as a threat to its survival. It then proceeded kill the crew one by one, making each incident look like an accident.

This was not just a deadly threat to the crew, but also a major threat to the entire Frontier Sector should it escape the system. If it escaped, it would find its way to other ships and stations, multiply and spread throughout the Frontier; eradicating people wherever it went. The stakes were high, and the surviving crew had to find a way to defeat the Matrix before their relief ship arrived and unknowingly spread the Matrix to the Frontier.

Retrieved from "https://starfrontiers.fandom.com/wiki/Matrix_(lifeform)?oldid=8264"
Community content is available under CC-BY-SA unless otherwise noted.