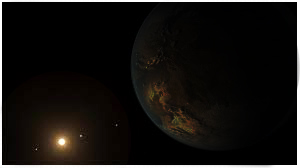 Mechano is a large, uninhabitable world orbiting the star Mechan, which was selected to be the "homeworld through colonization" of the Mechanon "race".

In Federation Year 70, sixteen years after the Mechanon Revolt on Volturnus, the near-entierty of the Mechanon race departed the planet on a fleet of hundreds of ships secretly built underground in abandoned Eorna facilities, led by the peaceful leaders of the Thinker Caste, leaving behind only the Mechanons who did not agree with the Thinker Caste; mostly Warrior Caste "maladjusteds" and the simplest non-Mechanon "conventional" Robots behind.

Once in space, the ships linked in groups of 6-10, accelerating into the void as they broadcast their intention to live peacefully. They were not seen again until FY 77, when a commercial exploration vessel entered the Mechan system and detected binary radio transmissions from Mechan Prime (the central "capitol city") on a planet that seemed incompatible with organic life.

Mechano is not yet a member of the UPF. It was founded before SWII by Mechanons escaping persecution on Volturnus. Because of the Mechanons' non-organic nature, the UPF is proceeding slowly with the Mechanon request to join the UPF. No known bioform has ever set foot on Mechano and its atmosphere is reported to be deadly to organic life.

Retrieved from "https://starfrontiers.fandom.com/wiki/Mechano?oldid=13496"
Community content is available under CC-BY-SA unless otherwise noted.