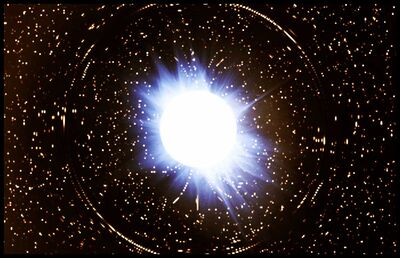 A neutron star is a type of stellar remnant that can result from the gravitational collapse of a massive star during a supernova event, where the exploding star lacks the mass to become a black hole. Neutron stars are the densest and tiniest stars known to exist in the universe; although having only a radius of about 10 km (6 mi), they may have a mass of up to five times that of a Sun-sized star.

Any star with an initial main-sequence mass of around 10 solar masses or above has the potential to become a neutron star. As the star evolves away from the main sequence, subsequent nuclear burning produces an iron-rich core. When all nuclear fuel in the core has been exhausted, the core can no longer support the mass of the shell and it collapses, releasing a tremendous amount of gravitational energy. As the rest of the star falls onto the collapsed core, it rebounds and explodes in a supernova, ejecting the outer layers of the star outward at relativistic velocities, forming nebulae such as the Xagyg Dust Nebula and the Greater Morass. The rapidly spinning remnant has a mass of 1-4 solar masses; any heavier and it continues to collapse until it becomes a black hole.

About one in twenty neutron stars form as one or both parts of a Binary Star System.

Neutron stars appear white to the naked eye,[1] and are extremely dense, with a surface gravity measured in the millions of g's.[2]

More importantly, each has a unique pulsating radio signature that is extremely useful for stellar navigation, much like the lighthouses of old.

Neutron Stars of the Frontier SectorEdit

Within the Standard Map of the Frontier, there are six neutron stars:

Retrieved from "https://starfrontiers.fandom.com/wiki/Neutron_Star?oldid=13558"
Community content is available under CC-BY-SA unless otherwise noted.