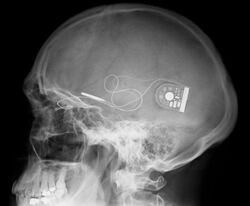 Organic computers are cousins of the standard Star Frontiers computer. Like normal computers, they are used to store and analyze information. However, they have many important differences. [1]

An organic computer may either be housed or implanted. A housed organic computer is much like a normal computer.[2] The actual processing part of the computer is kept in a small tank filled with nutrients. Connections allow the computer to be interfaced with other computers and machinery. Its advantage is its extremely small size. An implanted organic computer is much different from a normal computer; it is surgically placed inside a person or creature and becomes part of that person's brain. Its power is obtained from the food the person eats. An implanted computer interfaces with other computers by a micro-transmitter/receiver that is part of the implant. The computer interfaced to will require a similar transmitter/receiver as part of its equipment. Programs for an implanted computer are read by the person and "stored" in his memory. The implanted computer then draws these programs out of the person's memory. A character may have as many programs memorized as his Logic Ability divided by 10 (round up)[3]. These programs may be of any level. If the character is ever injured to zero Stamina points or below, the implanted organic computer is destroyed. This is true even if the character is placed in a freeze field and later revived.

For example, Zir-zak (our Vrusk friend) has an implanted level 1 organic computer. His Logic Ability is 65, so he may store up to seven programs in his mind. The programs can be of any level, but Zir-zak may only use 10 function points at any one time.

Important: Characters with implanted organic computers do not become supermen! They simply have access to a computer at all times. If a character attempts to have his computer solve something with too many variables, it will be beyond the abilities of the program. With any program, the character must still supply exact instructions and data. Computers cannot guess outcomes or predict events without a great deal of information.

Organic computers may only be implanted at the largest of hospitals with the most advanced of techniques. The process is very expensive and requires one month of hospital time for each level of the computer. The table below lists all the information on function point potential, size, and costs.

The computer receptor implant will allow the user of the implant to be in contact with his computer at ranges up to five kilometers. The user simply "thinks" his request to the computer. The computer (if it has the proper program) will then send an answer to the user, where it will be "heard" as a thought in his brain. So long as the user stays within range, he will be in contact with his computer.

When a character buys a computer receptor implant, he is actually buying a special implant, an attachment to his computer, and a special transmission program. The implant is a micro-transmitter/receiver with special connections that attach to the nerve cells of the user. This implant must be surgically attached to the character (just under the skin). This work can only be done at an advanced hospital (referee's decision where) and takes two weeks. The computer attachment is a similar transmitter/receiver that connects to the computer. The transmission program allows the two transmitter/receivers to talk to each other, and uses one function point. This program has no levels. The computer receptor implant costs 50,000 Cr. Transmitter/receivers that attach to other computers cost 2,000 Cr each.

Retrieved from "https://starfrontiers.fandom.com/wiki/Organic_Computer?oldid=10931"
Community content is available under CC-BY-SA unless otherwise noted.