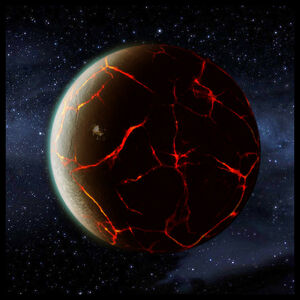 Outer Reach is one of two habitable planets in the Dramune System.

Outer Reach has a reputation throughout the Frontier as the home of gangsters, pirates, cheap thugs, and other interstellar scum. Like many things, this reputation is both based on fact and yet somewhat undeserved, as it speaks ill of the millions who toil daily to make a decent living.

Outer Reach is cold and inhospitable. The planet's original settlers were drawn by the lure of mineral wealth locked within the planet's rocky shell. Uranium, gold, and aluminum are just a few of the elements that have been extracted from Outer Reach by the millions of tons since they were first discovered.

Barren rock fields and harsh, craggy mountains cover much of the planet's surface. Chains of volcanoes lace the lands, many of them constantly spouting masses of smoke and lava. The planet presents a bizarre picture from space: mile-wide streams of molten rock trace fiery paths through the landscape, crimson rivers of fire trickle like veins across her black surface, and huge lakes of lava scar her crust like open, bleeding sores.

The severe environment on Outer Reach has prevented the development of any native life forms--plant or animal. Although the atmosphere contains breathable amounts of oxygen, the scarcity of water undoubtedly precluded any natural evolution.

Outer Reach was originally settled in 333 pf by freethinking individualists drawn by the planet's mineral resources. As these resources begun to diminish, competition for unclaimed territories became intense, and a "might makes right" philosophy evolved. A number of small kingdoms and dictatorships battled each other for decades, until finally the Styrigian nation emerged as the supreme power. After the warring ended, a fierce rivalry continued between the Styrigians and their closest contender for power: the Maltharian Confederation. Finally, the two forces worked out a unique compromise. The Styrigians gained control of the planet's surface, and the Maltharians took control of the space stations orbiting Outer Reach. The two governments have cooperated peacefully. Both the planetary and extra-planetary governments are dictatorships. The Maltharians are ruled by the dralasite known as "The Malthar".

The population of Outer Reach numbers only 20 million.[1] Most of these individuals, immigrants and their descendents, live in large, climate-controlled cities that draw energy from geothermal sources. In fact, the chief advantage of manufacturing on Outer Reach is the almost free energy that can be obtained from these underground sources.

Outer Reach is known throughout the Frontier as home for gangsters, pirates, cheap thugs, and other interstellar scum. This reputation is richly deserved. It is a gathering place for criminals and outlaws of all types. People there do not ask strangers how they make their living. Weapons are not allowed by inhabitants though police may look the other way when there is no threat to the safety of the state. Active secret police forces both in space and on the planet's surface quickly stomp out any dissident behavior. Generous bribes must be offered at every level of the bureaucracy before any kind of action is possible.

The mines are playing out, so now the planet's main source of income is the production and smuggling of illegal commodities. Although not famed for quality, the products of Outer Reach can be purchased almost anywhere in the Frontier--if you have the right connections. According to some estimates, fully 50% of the planet's income is made in this way. Exports of raw materials goes to Rupert's Hole, Triad and Inner Reach. Imports are 95% of agricultural products from Inner Reach.[2]

The Maltharian Confederation is ruled by Malthar a Dralasite. Darkworld Station is his headquarters and is rumored to shelter the "home offices" of his massive crime syndicate, which has tentacles reaching to the farthest corners of the Frontier.

In recent years, the development of Ixiol as a recreational drug has greatly increased the Malthar's profit margins. This drug is readily available on Outer Reach, selling at a street price of 100 credits per pill. The drug produces a long-lasting euphoria, but it is highly addictive; an Ixiol habit debilitates and eventually kills its victim. The production of Ixiol is a closely guarded secret.

Outer Reach has a small, highly trained fleet of militia ships, and the Malthar can easily muster a good number of pirate vessels as allies. Because of this combination, the planet arguably possesses the deadliest starship attack force of any single planet in the Frontier. Fortunately for peace-loving peoples, the criminal world has not been able to prevent the UPF Spacefleet from coming to the aid of some of the criminals' potential victims.

Outer Reach has five natural satellites in orbit. The Three Sisters are three red moons that share intertwining orbits which are completed every 18 days. Diamond is a silver moon that completes an orbit every 33 days, and Shadow is a brown moon which completes an orbit every 60 days. Diamond and Shadow holds several colonies and research stations, as well as mining operations.

Do to the active trade and mining operations on Outer Reach, several artificial satellites were built in its orbit, or the orbits of its moons, holding a prime position on Frontier trade routes. Darkworld Station is an armed space station that acts as the primary defense of the plant. This station is the home of the local militia fleet. Pinnacle is a research station in orbit of Outer Reach. Outer Reach has a class-III Ship Construction Center that can build 20 hull points of civilian system ships at one time. Beyond those, Outer Reach has several other space stations it its orbit, or the orbits of its moons.

Outer Reach has the largest fees in the Frontier for docking, averaging 250 Cr per 10 hours.