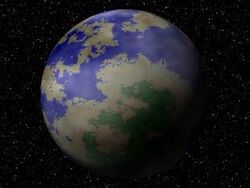 Pale is one of the planets in orbit around Truane's Star, the other is New Pale.

Economy: Most of economy is based on mining. The planet is rich in metals and fossil fuels. Industrial plants and factories serve as the main employers. The population is large enough where raw materials can be mined and processed for export.

Food on Pale is hard to come by due to the extreme weather conditions. Most of their food is exported from New Pale. Economy has been in recession and there has been large population exit due to the war between Pale and New Pale. Since conclusion of war (F.Y. 63), Pale has been climbing out of its recession.

Retrieved from "https://starfrontiers.fandom.com/wiki/Pale?oldid=13504"
Community content is available under CC-BY-SA unless otherwise noted.