Port Loren is believed to be the earliest colony founded on Gran Quivera. This sprawling capital city is home to the United Planetary Federation, the Office of the Prime Minister, the headquarters of PGC, Galactic Task Force, Inc. and Star Law as well as many other corporations and government offices.

Port Loren is often cited as "The Center of the Galaxy" although this is hardly true. The city is so vast that over one third of the planet's heavy population lives within it.

The map shows the downtown area of Port Loren. Areas to the east, west and south of the map are residential. The spaceport is to the north. (see Spaceport below) Each square on the map is 5 meters across.

Most large buildings (the Government Building, Pan-Galactic Corporation headquarters, the Medical Complex, etc.) extend several stories below the ground as well as two or three stories above the ground. Vehicles can access underground parking areas through entrance ramps and elevators (noted as IN or OUT in the map). Pedestrian walkways connect some buildings, and cross above the roads. The monorail is built above the buildings and walkways.

Although there are many types of vehicles on the road, the most common on Port Loren are hover cars. To help control the turning of hover vehicles at intersections, magnetic field generators built into the roads automatically reduce the speed of approaching vehicles to around 40kmph. 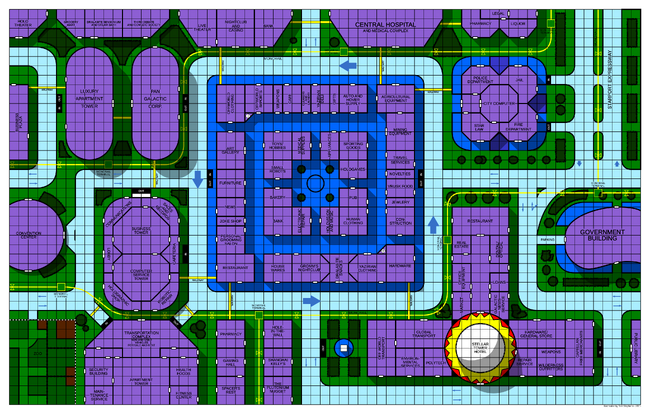 The monorail is the fastest way to travel long distances in the city. To get on the monorail, a rider takes a lift to the terminal and waits for a car to arrive. There are two tracks on each railway, both going in opposite directions. Monorail cars travel at 40-60kmph. Each car can hold up to six passengers. A rider wishing to shop or to travel in the opposite directions must wait for the car to stop at the text terminal to leave or wait for another car to arrive.

Riding the monorail costs 1 credit per day, and the rider can ride the monorail as many times as he wants that day. An ID Card is required to board the monorail.

This is a place to watch movies, plays, concerts, life debates, stand-up acts, etc. Entertainment comes form all across the frontier.

This is one of the most prominent medical facilities in the planet.

Before moving most of their operations to the Pan-Gal system, this was the primary headquarters of the Pan-Galactic Corporation. Right now, this set of buildings stands as a presence and landmark within the frontier. Do to what this building represents -- targets for terrorism and espionage -- they are well secured by PGC-owned corporate security forces. The buildings contains their office and apartment buildings for the planet. The Pan Galactic Towers are iconic landmarks for the city, and recognized throughout the frontier from media set within Port Loren.

This outdoor mall is the commercial hub of the Frontier Sector. The locally-own stores sell wares form all across the frontier.

This is the headquarters to the city's Police and Fire Departments, the local jail, the city's mainframe network, and is the primary headquarters of Star Law. Do to what this building represents, it is one of the most well-secured areas within the city.

This is building is the seat of local and planetary government. Due to what this building represents, it is one of the most well-secured areas within the city.

This is an indoor mall, centered around a hotel. The dome is just as iconic of a landmark as the Pan Galactic Towers.

This is a seedy area within the city. Here you can find bars, betrothals and casinos frequented by planet-side spacers. 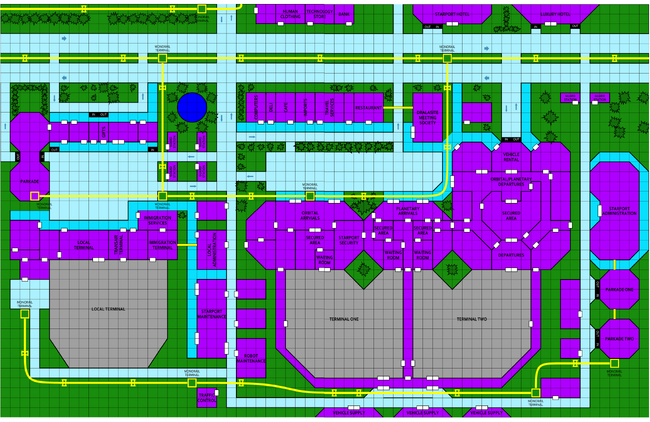 Retrieved from "https://starfrontiers.fandom.com/wiki/Port_Loren?oldid=13850"
Community content is available under CC-BY-SA unless otherwise noted.