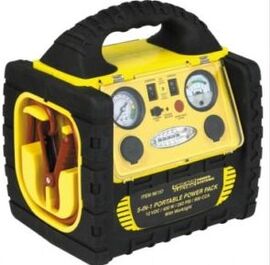 A Power Econopack is an active-matrix energy storage device similar to a Power Beltpack or Power Backpack; it is often mounted in vehicles to power vehicular screens, as well as other powered equipment, such as Subspace Radios, Freeze Fields and heavy energy weapons.

Econopacks can be recharged at a cost of 5 credits per 1 SEU recharged. Recharging can be done at any weapons shop, hardware store or fuel station.[1]

Despite its compact size, it is rarely used as a backpack when active.

Retrieved from "https://starfrontiers.fandom.com/wiki/Power_Econopack?oldid=13372"
Community content is available under CC-BY-SA unless otherwise noted.