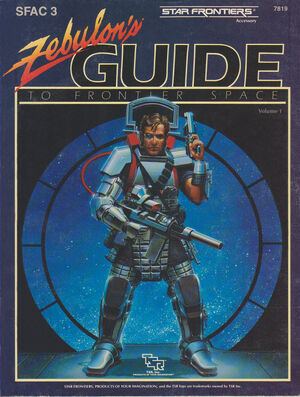 Landfleet Sargent Efram evaluated his squad's position and swore in Yazirian. They were pinned down and cut off from the rest of the 52nd PA Company by 50 kilometers of rugged terrain and what seemed like half the Sathar invasion force. As he crouched behind a fortuitously-placed boulder, he took a moment to check his status indicators, projected on his heads-up display.

TacNet was down, switched off so that the worms couldn't home in on their IFF pings. Therefore he was dependent on sight alone to show him where his troopers were. Like him, they were hunkered down behind whatever cover they could find, so he turned to checking his consumables.

Life Support looked ok, he still had 10 hours of reserve atmosphere and Doc had estimated that the new gas the worms were using would fully dissipate within the next two. Briefly he debated going back to outside air, but decided against it. They still didn't know if the filters could handle the new toxin.

Ammunition was an issue. Most of his expendable rounds were long since fired. He had two grenades left in the launcher mounted over his left shoulder. The right one had been torn off in an earlier skirmish.

Efram brought up his Power indicators and noted how low they were. Stang it, he told Supply that they needed pellet replacements for their RTGs a month ago but they'd put him off again...Well, no help for it. They'd have to make due...

He caught movement in his peripheral vision. Here they come again, he thought. He seriously doubted there was any way they could hold the worms off this time. He made a grim decision and activated his external audio speakers as he stood. Concealment didn't matter any more. He shouted to his squad "All right you apes...do you want to live forever?!?"

Powered Armors are self-contained armored suits, operated by a neuro-linked exoskeleton. Modern powered armor was evolved after many years of exploration and conflict.

Powered armor started off as simple armored spacesuits used for boarding actions, but advancement in technology has resulted in a versatile and highly potent suit of armor. The mix of a sophisticated neuro-interface and exoskeleton network results in a soldier becoming a powerful super-soldier.

Access to powered armor is limited to military personnel, and the possession or ownership of these suits by civilians is highly illegal.

The framework is covered by a self-sealing spacesuit with an outer shell of plasteel plates. Kinetic sensors within the suit allow the wearer to feel anything that touches the suit and are highly sensitive. If the armor plates gets damaged, they can be removed and replaced quickly and easily.

The framework also has a number of hard-points and hookups that allow them to mount all sorts of external weapons and equipment (see below).

Powered armors have a built-in Type-1 Parabattery,[1] that can supply power for a few hours of active use. They can also mount a backpack with a Type-1 atomic generator.[2][3] This pack can supply the suit with a virtually unlimited amount of power, as long as the pack is not overtaxed with power hungry weapons.

Powered armors are controlled by a sophisticated neuro-interface. The link allows the wearer to control systems by thought alone. This offers the wearer unparalleled control of the suit. The system distorts the user's awareness to the point of being to act and react in a hyperactive rate. The only downside to this technology is that some level of training is required to properly use these suits. Such training is needed to keep the wearer from triggering the systems impulsively.

The helmet is mounted to the framework by a specially designed yoke in order to protect the wearer's neck from lethal impact damage. As noted above, the helmet contains the link to the neuro-interface. Unless the the suit uses a neuro-scanner, the link makes up a minor part of the helmet.

The wearer sees through the sensors of the helmet's eyes by a screen over the wearer's eyes. The sensors can cycle between visible spectrum, low-light, and thermal optics. Electronic filters keep the wearer from becoming blinded when it suddenly gets too dark or to bright. Informational displays that show power/ammunition remaining, environmental warnings, basic navigational data (compass heading, etc), and so forth can be superimposed on the screen. Sensors in the screen can follow eye movement.

In the event this system gets damaged, the eye sensors can be pulled off so the wearer can use the screen as simple sungoggles (displays still show). Doing so leaves the wearer vulnerable to a well placed hit to the eyes.

The helmet has an audio pickup that can be adjusted to include ranges beyond normal hearing. This system can filter out loud and busy background noises. It is linked to a built-in poly-vox system, and the communication system is ties to both systems.

Powered armors have built in Albedo and Inertia screens (these suit are insulated against electronic stun and sonic attacks). Usually the Inertia screen is active to counter explosive traps. The Albedo screen is active when lasers are heavily used in a shoot-out. Emitters across the suit, controlled by the neuro-link, allow the screens to be activated or switched at will.

As noted above, powered armor can mount modular equipment. Common attachments include: helm-mounted sensors, wrist-mounted weapons, shoulder-mounted weapons and scanners, and engines that allow for movement through unusual environments.

Such movement engines include maneuvering thrusters for space, jump packs for short flight, and propulsion pods for underwater movement. All this equipment is controlled by the suit's neuro-system.

The modular nature of powered armor allows for a wide range of configurations. They can carry a great deal of mass, but doing so reduces maneuverability (can't move at super-speed or make jumps) and drains the power supply quickly (reducing it's deployment range).

Recon — Light armor plating and equipment for better range and maneuverability. Equipment is more focused on communication and surveillance gear then offensive weapons; weapons are for self-defense.

Strike — as with Recon, but with equipment focused on weapons that can deliver a lot of damage at once via disposable weapons or munitions (missles, rockets and grenades). Good for hit-and-run attacks or to support Recon teams.

Combat — equipped with little more than the standard systems to keep cost down. This is a common front-line configuration.

Fire Support — as with the Combat configuration, but with large support weapons.

The type of suit was conceived by Malcadon, and is based on many sources

Retrieved from "https://starfrontiers.fandom.com/wiki/Powered_Armor_(house_rules)?oldid=11510"
Community content is available under CC-BY-SA unless otherwise noted.