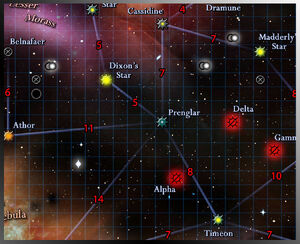 Prenglar is an F9 star with two habitable worlds in orbit: Gran Quivera and Morgaine's World.

As a centrally-located hub, Prenglar is served by five trade routes:

One of the first systems discovered by humans in the Age of Exploration, Finding so many habitable worlds in one system, the early explorers quickly settled on the fifth planet, which they named Gran Quivera. Using this as a jumping off point, they explored further into the local group, encountering other species and finding new worlds to settle.

One of the earliest corporations to form on Gran Quivera was Pan-Galactic Corporation (PGC), originally created to aid in colonization and exploration. As human colonies grew and relations with other races stabilized, PGC expanded its mandate to include travel, mining, freight and more, eventually becoming the first Megacorp.

During the First Sathar War, the Prenglar system saw the Battle of Two Fleets, in which the great armada of the First Common Muster faced the Sathar fleet in a pitched battle that would decide the fate of the Frontier.

Outnumbered and out-gunned, the masterful Admiral Vincent Moragine used superior tactics to overcome the Sathar fleet. Sadly, Admiral Morgaine was mortally wounded in the conflict. The fourth planet in the system was named Morgaine's World in his honor.

The founding of the United Planetary Federation (UPF) took place on Gran Quivera after these events. Lengthy meetings were called and attended by members of all the major races. After much debate, a pact of mutual protection and trade, while still allowing self-governance of individual worlds and systems was established.

With its central location, it was agreed that Gran Quivera would be the center of this new governmental body and the Council of Worlds and the Office of the Prime Minister can both be found here as well as many other UPF governmental buildings.

After the war, many humans chose to colonize Morgaine's World. This large planet with its beautiful rings is an arid land with a harsh climate. These pioneers struggled long to survive and little assistance was available from Gran Quivera which was recovering from the war. When the Capellan Free Merchants (CFM) arrived, they were greeted by both worlds with great appreciation, much to the consternation of PGC.

When the Blue Plague arrived, there was great fear across the system. Both Gran Quivera and Morgaine's World banned all travel within the system, which hindered efforts to find a cure and led to resentment among other systems which persists to today.

In hindsight, if the authorities had taken some simple precautions, the cure eventually discovered in the MSO Center on Morgaine's World would have been much sooner and more lives could have been saved.

As hub of the UPF, the people of the Prenglar system are a diverse lot. Members of all known races can be found here, most working in various government positions or for PGC.