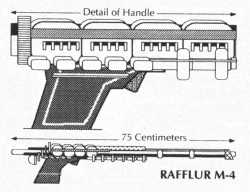 Proton weapons are usually referred to as "rafflurs" (RApidly FLUctuating Radiation). All proton beams are bright white and emit a powerful blast of protons toward the target. Rafflurs are unusual in that most take only minipowerclips and cannot be attached to powerpacks (they have a nasty habit of backcharging and blowing up any power source heavier than a minipowerclip).[1][2]Proton beams can be deflected or bent away from their target by powerful magnetic fields.

Rafflur weapons are generally viewed as the favored weapons of the Rim races, but they can be found throughout the Frontier Sector, in the hands of many races.

Rafflur M-1: This personal defense device is the size of a cigar and contains an SEU microdisk. It only fires once at an extremely limited range. After it is fired, the microdisc must be ejected and a fresh one inserted before it can fire again.

Rafflur M-2: The proton pistol is a handgun that is slightly larger than a Ke-1000 laser pistol. Each shot uses two SEUs.

Rafflur M-3: This extremely limited production model was specifically designed for Star Law forces. It is a 45-cm-long pistol that provides more room for attachments. It has design modifications such as a folding stock and energy modulator that increase its range and accuracy (+1 Column Shift modifier). Anyone other than a Star Lawman would have a great deal of difficulty locating an M-3.

Rafflur M-4: The official weapon of the "Hoppin' Hundred and Eighth" Humma Elite Forces, the main advantage of these 75-cm-long rifles is that they release all 10 SEUs at once in an area effect. Their range, however, is extremely limited (as that of a pistol). Their beam is cone-shaped with the point at the gun's muzzle. The beam width increases by 1 meter for every 2 meters from the muzzle (5 meters wide at 10 meters from the muzzle, 13 meters wide at 26 meters, etc.). Any target in the blast path receives a maximum of 40 points of damage (is a Cobalt result is obtained on the attack roll). If the first target is within 2 meters of the muzzle, it totally blocks the beam and nothing behind the first target can be damaged. Otherwise, the M-4 can damage any target in the beam. The weapon's circuits superheat when fired, requiring the weapon to cool three turns before reloading with a new minipowerclip.

Rafflur M-6: This proton rifle is slightly larger than the Ke-2000 laser rifle.

Rafflur M-8: This long-barreled, long-range beauty comes equipped with a built-in telescopic sight. It cannot be aimed accurately at anything closer than 15 meters. An expensive break-down version is often used by hunters.

Rafflur M-10: The M-10 is the proton counterpart of the Ke-5000 Heavy Laser. It comes equipped with a folding quadpod mount that safely holds the 100-SEU pack or parabattery used in its operation. Unlike the rest of the rafflur M-series, this weapon has a special capacitor baffle fitted to prevent feedback when using a power source more powerful than a minipowerclip.

Two human-sized or one large bioform[3] are needed to transport it. Optional swivel mounting equipment for vehicles, fortifications, etc., can also be purchased.

Retrieved from "https://starfrontiers.fandom.com/wiki/Proton_Weapons?oldid=12703"
Community content is available under CC-BY-SA unless otherwise noted.