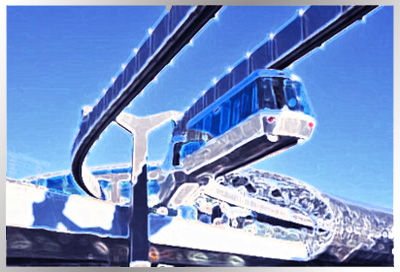 Public Transportation is a shared passenger transport service which is available for use by the general public for a small cost.

Monorails are common mass transit systems on Frontier worlds. Monorail cars can hold up to six passengers and travel at 40 to 60 kph (70-100 meters/turn). Monorail passengers usually pay 1 Cr per day for an unlimited number of rides.[1] Occasionally, monorails are built underground and called subways.

Subshuttles are a form of monorail specialized for high-speed transportation over longer distances. They are so named because they tend to be built under ground. Passengers ride in pressurized cabins while the monorail itself travels though a sealed tube from which most or all of the atmosphere has been removed.

As a result, the subshuttle can achieve speeds in excess of 1,000 km/hour or more with greater energy efficiency than other forms rapid transit.

Rental vehicles come in all types short of military models. Where cabs are used for short trips within a local area, rentals are used when someone needs a personal vehicle for a short time. Cycles typically costs 25 credits a day, cars are around 50 Cr a day, transports are 75 plus 100 Cr or more a day, and aircars are 100 Cr a day.

Sometimes referred to as "turbolifts" or simply "lifts", elevators are common within most buildings. Vertical elevators are the most common, but some complexes feature multi-directional carriages that move along vertical and horizontal shafts by complex system of rails.

While most vertical elevators are a single carriage that moves freely in a shaft, a paternoster elevator is a chain of open compartments (each usually designed for two persons or one Vrusk) that move slowly in a loop up and down inside a building without stopping. Passengers can step on or off at any floor they like, with one side always going up, and the other side always going down. Paternosters offer more expediency then traditional elevators, but they are dangerous if one trips entering or exiting and gets crushed. Using an elevator, regardless of type, does not cost anything.

Also called people-movers or sliders, these are sidewalks that are built like conveyor belts. A person simply steps onto the slider and it carries him, her or it along at 6 kph (10 meters/turn). Adjacent sliders moving in the opposite direction ether have static ground between them or are separated by a railing to prevent collisions. Sliders cannot make drastic turns, but one conveyor can end at another conveyor. They also cannot split directions, so many end at a static junction plate. Escalators are like sliders, but are made of segmented steps that allow of for gradient elevation — basically, moving stairs. Using a slider, regardless of type, does not cost anything.

Moving walkways are usually found only in spaceports and city centers in major cities on major worlds. They are also often found in major shopping centers and luxury housing complexes.

Often called orbiters, these flyers are a cross between an airplane and a space ship. They are powerful enough to fly into orbit around a planet, and sturdy enough to re-enter the atmosphere and land on the surface. They are commonly used to carry supplies and passengers to orbiting space stations and spaceports. An orbiter can reach an orbiting space station in one to two hours.

Surface ships can range from three-mast sailing ships to luxury liners and supertankers. Hovercraft are used commonly in areas where the sea is relatively calm. Skimmers can be used over water if the waves are not more than 40 cm high.

Used on worlds where the seas are very rough, covered with ice or otherwise unsuited to surface travel. They are common around underwater cities and sea-bottom mines.

Travel between star systems is more expensive and time-consuming than planetary travel. Most starships never land on a planet. Passengers board shuttles on the ground that take them into orbit, where they board a waiting starship or wait for one at a space station. When the starship reaches its destination, shuttles again take the passengers either to the planet's surface or to an orbiting space station where they can wait for another flight.

Retrieved from "https://starfrontiers.fandom.com/wiki/Public_Transportation?oldid=12157"
Community content is available under CC-BY-SA unless otherwise noted.