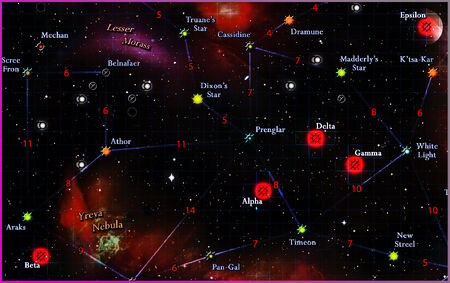 During the outbreak of the Blue Plague, five star systems where put under a permanent quarantine by Council of Worlds. Such worlds where designated by the following Greek letters: Alpha, Beta, Delta, Epsilon and Gamma. Any spaceship seen attempting to leave one of these systems is to be destroyed by Spacefleet before it has a chance to spread the plague any further.[1]

Clarion, Hargut and Pale also suffered the plague, but drastic measures resulted in temporary quarantines only.

After a vaccine for the Blue Plague is discovered at the Medical Services Organization Center on Morgaine's World, the Blue Plague was eradicated from the Frontier in four years.

The fate of the five quarantined systems remains unknown...

Retrieved from "https://starfrontiers.fandom.com/wiki/Quarantine_Systems?oldid=13537"
Community content is available under CC-BY-SA unless otherwise noted.