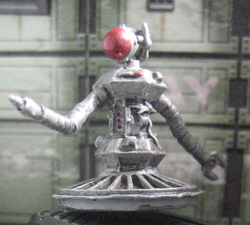 Robots are complex, mobile machines in widespread use throughout Frontier space that are designed to perform specific jobs.

Many types of robots are available throughout The Frontier, though most are classified as one of the eight basic types listed here:

There are six levels of robots. A robot's level indicates how complex it is. High-level robots can perform more complicated jobs.

When a robot is built, the designer must give it a body type, a way to move, a way to manipulate objects and programming. Special items can be added at additional cost.

All robots have a mission. A mission is a set of rules that tell the robot what its job is. A robot's mission is the most important order it has, and overrides any orders that conflict with it.

For example, a level 3 security robot might have the mission: "Stop all unauthorized personnel from entering this building." Its functions could define "stop" as giving intruders a warning, then using the Restrain program to keep them from entering. "All unauthorized personnel" could be defined as any person or machine that is not wearing a special badge. The robot must be given a function that defines "this building," and another that tells it what areas it must patrol to look for intruders. Another function could instruct it to call the police and report the break-in after an intruder has been restrained.

Programs are a combination of software suites and the hardware required that permit a robot to do things beyond basic unskilled/semi-skilled labor.

Only level 2 or higher robots may be equipped with the following programs:

Only level 4 or higher robots may be equipped with the following programs:

Some advanced level 6 cybernetic robots[8] have been known to incorporate the following program:

All body types come with two manipulative limbs (included in cost). These can be mechanical arms, tentacles, or specialized limbs for digging through rock or mounting tools. Parabatteries are sold separately.

Light robot bodies come in all shapes. They are generally smaller than the average person, but may be built of lighter materials, approximating the size, though not the mass, of a Standard Body robot. They weigh 50 kg (62.5 kg with parabattery) and have 50 Stamina points. A Light Body is powered by a Type 0 Parabattery.

Standard robot bodies come in all shapes. They are about the size of an average person — ether around 1.5 meters squared or 2 meters tall — weigh 100 kg (125 kg with parabattery) and have 100 Stamina points. A standard body is powered by a Type 1 Parabattery.

Heavy duty robot bodies also are available in any shape, but they are about the size of a ground car and weigh about 500 kg (550 kg with parabattery). A heavy duty robot has 500 Stamina points, and is powered by a Type 2 Parabattery.

Anthropomorphic robot bodies look like one of the four major races. They weigh roughly 100 kg (150 kg with parabattery) and have 100 Stamina points. They are powered by a Type 2 Parabattery.

Basic Movement: All body types can be equipped with wheels, tracks or mechanical legs, whichever the designer wants (included in cost of robot body).

Under normal conditions, most robots move 10 meters/turn (6 kph). They can travel much faster, however. Top speeds for various types of robots are shown on the adjoining table.

A robot can be given additional arms and legs, a different means of movement, special equipment or special programs. Every two additions picked from the Special Program, Altered Movement or Extra Limbs tables increase the size and cost of the robot's body by 10%.

EXAMPLE: Sheeta Starfox is customizing a combat robot. Her standard combat robot has a standard body (2,000 Cr), the attack/defense special program (1,000 Cr) and is level 4 (2,000 Cr). It originally cost 5,000 Cr. Sheeta wants to add the Computer Link and Search and Destroy programs, rotor type movement and two additional pairs of standard limbs. The size and cost of the robot's body must be increased 30% (2,600 Cr). The Search and Destroy program costs 3,000 Cr and the Computer Link program costs 4,000 Cr. Rotor movement cost another 5,000 Cr and the additional arms cost 1,600 Cr. The customized robot will cost Sheeta 19,200 Cr (14,200 Cr more than the standard robot). The robot weighs 155 kg (or 130 kg without its battery), but still has only 100 Stamina points.

A robot cannot attack unless it has a restrain, self defense or attack/defense program.

A robot's basic chance to hit is 30% plus 10 x the robot's level (factored in the table on the side). This number is used in both ranged combat and melee. A robot's Initiative modifier is its level plus three. Other modifiers apply as usual. Remote weapon systems usually are controlled by computers using Robot Management programs.

Retrieved from "https://starfrontiers.fandom.com/wiki/Robots?oldid=12772"
Community content is available under CC-BY-SA unless otherwise noted.