The Rotorpack is another option in the field of one-man vehicles available in the Frontier. Small, agile, fairly energy efficient, and useful for scouting and patrol operations; they were originally designed for the military/security market. Unarmed versions have become popular in the civilian world as well.

Rotorpacks consist of not much more than a power source, engine, counter-rotating rotors, and canopy mounted on a semi-articulated, rigid frame that supports the pack when not in use on a pair of skids. The whole system collapses down into an area of approximately 1.5 meters on a side for storage.

Some exploration teams prefer rotorpacks to jetpacks or glijets because they offer greater speed and range than either, and are fairly easy to operate, even by untrained pilots (+15% to any Piloting check).

The pack is flown primarily by the pilot shifting his weight within the frame. The gyroscope notes the change in body position and the pack's systems adjust accordingly. Two joysticks built into the “arms” of the articulation frame provide fine control.

Rotorpacks can increase or decrease their altitude by 20 meters a turn.

When scouting, rotorpacks fly at or above the level of the treetops, 50 to 100 meters above the ground. To stay out of sight they can fly very close to the ground, following the contours of the hills and valleys. This is called Nap of the Earth (NOE) flying. NOE flying limits a rotorpack to 100 kph (175 meters/turn).

Rotorpacks originated in the military and are considered the "standard" version. Military rotorpacks are fitted with radiophone communications, a targeting system (negates In moving vehicle penalty), infra-red and low-light vision enhancements, a laser pistol equivalent with a 100 SEU segregated power supply, and 4 mini-missiles (treat as half-range rockets and use grenade damage).

Civilian versions of the rotorpack come without any additional systems. They can be legally fitted with the same communications equipment and vision-enhancement as military rotorpacks, as well as cameras and other scanners/detectors. Civilian rotorpacks with such equipment are particularly popular for Search and Rescue work. 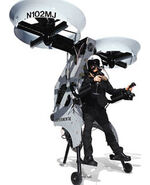 Add a photo to this gallery
Retrieved from "https://starfrontiers.fandom.com/wiki/Rotorpack?oldid=10024"
Community content is available under CC-BY-SA unless otherwise noted.