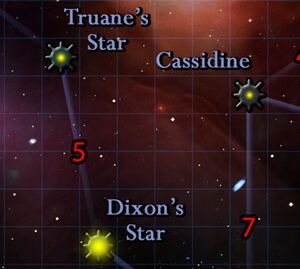 Rupert's Hole is one of two habitable planets in the Cassidine system (the other being Triad).

Rupert's Hole is currently a very fertile world, thanks to the terraforming work of the Cassidine Development Corporation (CDC)

Rupert's Hole is a direct democracy. Every six months the entire population of Rupert's Hole votes via computer on any new legislation. The general population is content to have no privacy for the protection it provides.

Any weapon may be carried on one's person. Public policy is enforced primarily by constant computer surveillance. Cameras and satellites watch nearly every bit of the planet. Police forces may be slow to respond as they are generally alerted to trouble by the sophisticated automated surveillance network, but with nearly every action being recorded there is generally little doubt as to who is responsible for wrong-doing.

Murder, theft, etc. are all, of course, illegal, despite free weapon policies. Appeals are possible, but if an appeal is lost the punishment is doubled.

Rupert's Hole was discovered in the early years of the Frontier. The planet was first used as a mining colony by Pan-Galactic Corporation until they abandoned the planet early in it's history. CDC then began the process of terraforming the planet, which proved very receptive to the process. When CDC discovered that the ground was a fertile treasure just waiting to be used for large-scale farming, it became one of the primary sources of food in the Frontier .

Retrieved from "https://starfrontiers.fandom.com/wiki/Rupert%27s_Hole?oldid=13516"
Community content is available under CC-BY-SA unless otherwise noted.