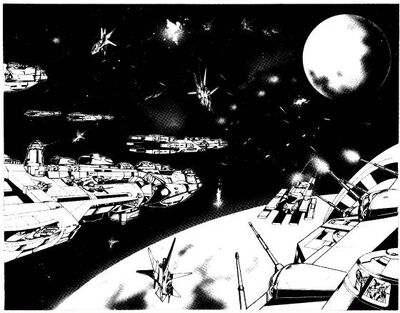 The Second Sathar War was a major conflict between the Sathar and UPF Spacefleet, between FY 80 to 90.[1]

In Federation Year 80, the Sathar capture a non-UPF system between Solar Major and Solar Minor. They dub it Outpost #1 and enslave its inhabitants.

Construction begins on a planet-wide military and industrial complex intended as a permanent base for incoming Sathar supply ships and troops. The Sathar swarm through the Xagyg Nebula and attack Volturnus.

New planet-wide battle tactics are used by the Sathar (including the massive use of diversionary, seeded monsters and cybernetically controlled creatures). The attack is a feint to draw Spacefleet to Zebulon. Task Force Cassidine is dispatched to Zebulon. By going through the White Light Nebulae, Sathar Fleet #1 enters the Frontier undetected. Sathar Fleets #2 and #3 attack Solar Minor. So overpowering are they that no word of the attack reaches Spacefleet.

By Federation Year 81, Sathar Fleet #1 attacks Madderly's Star. They encounter the new Spacefleet fortress on Kdikit. Its resistance is fierce and buys the needed time for reinforcements to arrive. Dramune sends three frigates and a destroyer from its militia while the UPF dispatches two destroyers and two light cruisers from its non-attached ships roster.

The UPF mines the sector between Cassidine and Madderly's Star. Sathar Fleet #1 is driven from Madderly's Star and pursued as it tries to make its way to Fromeltar. All militia ships in the sector, including half of Task Force Prenglar, are engaged in the pursuit.

Task Force Cassidine crushes the Sathar feint on Zebulon, but with heavy losses. The UPF now realizes how vulnerable it is to land attacks. The Rim Coalition dispatches the Flight to the other side of Lkaeok in search of Sathar supply vessels.

In return they ask the UPF to station Task Force Cassidine half way between Zebulon and Capelle to protect the Rim home worlds in case of a Sathar Sneak attack through the Muld Nebula. Strike Force NOVA arrives secretly at White Light. Admiral Niles believes more of the Sathar fleet may attack through the White Light Nebulae.

Sathar Fleet #3 attempts to circumnavigate the Greater Morass. Two weeks later it is engaged by long-range fighters from Moonworld. Without any knowledge of the existence of the Lynchpin system, the Sathar forge ahead expecting to find a lone spaceship. Instead, the Battle of Moonworld is joined.

By FY 83, the Coalition's Flight discovers the Sathar supply route around the Xagyg Nebula. They station themselves in deep space and proceed to destroy all incoming Sathar ships. The final dregs of Sathar Fleet #1, after slipping into the Xagyg Nebula off Fromeltar, arrive back at Sathar Outpost #1 and prepare to defend to the death.

The Battle of Moonworld ends with three-quarters of Sathar Fleet #3 destroyed.

The remaining Sathar vessels are forced to retreat into the Vast Expanse. Task Force Prenglar regroups off K'aken-Kar.

The UPF establishes Landfleet, the first interplanetary army raised on the Frontier. Thousands of Humma and Osakar arrive from the Rim and enlist, hoping to stop the Sathar menace before it invades their homeworlds. Many die for the Frontier, but still more stay and become citizens after the war.

By Federation Year 84, a Coalition Flight long-distance probe discovers Sathar Outpost #1 and reports its location before it is destroyed.

The remains of Sathar Fleet #2 arrive at Outpost #1. Despite a desperate shortage of supplies caused by the Flight blockade and terrible losses from previous engagements, the Sathar have completed their construction. Outpost #1 is now a formidable fortress.

Strike Force NOVA retakes Solar Minor. The fighting is fierce and half of the Strike Force and all of the Sathar holding force is destroyed.

The Battle of the Blockade. A reinforcement fleet from Sathar space is challenged by the Flight. Half of the Sathar fleet, most of them fighting ships, escape, but all troop ships are destroyed. About one half of the Flight is eliminated.

By Federation Year 85, the Flight is greatly increased by reinforcements from the Rim. Wing #1, the original Flight, rendezvous with Task Force Prenglar. Battered and weary, they still insist on joining the siege of Outpost #1 with the Frontier forces. This group of Rim spacers quickly gains notoriety in the Frontier and greatly enhances UPF-Rim relations. They are known as the Raging Rimmers.

Coalition Wing #2 takes up the blockade position. Wing #3 is charged with the defense of the home worlds. Task Force Cassidine sets for Solar Minor. The Sathar begin mining operations on the moons of Outpost #1.

Dralasites and the Coalition insist that a diplomatic mission be sent to Outpost #1. The Sathar agree to meet three months later to discuss a possible treaty. Non-Sathar agents represent Sathar interests at the meetings. Diplomatic talks are held for another eighteen months with no results. During that time, the Sathar strengthen their defenses and repair their ships. The UPF Landfleet is given time to become a formidable army.

Many Ifshnits remain in the Frontier after the war and begin the Free Merchant trade system throughout the UPF planets. They will become so firmly entrenched in Frontier life that the mega-corps will not be able to force them out, and eventually accept them as another mega-corp.

By Federation Year 88, the Battle of Five Fleets takes place. In a pincer action, Task Force Prenglar, Coalition Wing #1, Task Force Cassidine, and the remnants of Strike Force Nova attack the Outpost #1 system. Outpost itself is a mammoth world with two planet-sized moons.

The entire year is spent destroying the remnants of the Sathar Fleet, the minefields orbiting the planet, the small fighter squadrons the Sathar captured on the two conquered worlds, and the moon's mining and defensive operations. Lost in the action is the rest of Strike Force NOVA, except for the battleship Quasar, half of Task Force Cassidine, and all but two destroyers from Coalition Wing #1.