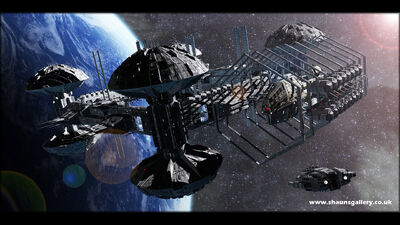 Ship Construction Centers are specialized Space Stations dedicated to the construction, maintenance, modification and repair of Starships and Spaceships.

The number after the System (Planet) is the number of Type VI Space Station Hulls connected to form the SCC.

SCC's are few in the Frontier sector, so they are constantly busy; through experience it has been discovered that working in a shirtsleeve environment is the most efficient method of construction; it is because of this that SCC's are equipped with massive pressurized modularly configurable airdocks, which allow for such an environment.

The docking bays of these Spaceship Construction Centers (SCCs) are large, open areas. Often, specific docks in the bay may be enclosed to contain air pressure, so workers do not need to wear spacesuits; these are called airdocks. Spacers generally refer to an airdock as "the shop."

To determine whether airdock space is available for ship construction, roll the number of dice specified under the Backlog/Occupation column. If the total is less than the maximum capacity for the SCC in question, it is the number of ship hull points (hull size values) currently under construction at that center. If the number is over this maximum, any points above the maximum represent ship hull points waiting for airdock space. If not enough airdock space is available for the characters' ship, the characters must wait for space to open up. The number rolled will decrease by 1 every day, until there is enough room in the airdock for the characters' ship (maximum capacity minus the hull size of the ship to be constructed).

Ships of Hull Size 1-5 which are equipped with chemical rockets, and are designed for making planetfall, can be constructed on a planet’s surface. All planets that are classified as “Industrial” in their population code are capable of producing ships equipped with Size A chemical drives (i.e. HS 1-4). Additionally, industrial worlds with orbiting Ship Construction Centers of any size can produce HS 5 chemical drive ships on the planetary surface.[1]

If such a ship is desired, construction slip availability mirrors that of Class III SCCs, since most of the facility's capacity is dedicated to the construction and maintenance of shuttles and orbiters.

The following systems have surface-based facilities:

These routine checks, replacements and tune-ups take a number of days equal to 1d10 plus the hull size of the ship. The cost is assessed to the ship owner at a rate of 1000 Cr per day of work. If the ship is operating under a company charter, the company and the owner split the cost in half.

If a ship has gone more than a year without maintenance, add another d10 to the number of days needed to complete the work. If two years have passed, 2d10 should be added, and so on. In other words, for each year that the ship is not maintained, another 1 to 10 days of work are required when it finally does get into the shop.[3]

Zebulon's Guide to Frontier Space (ZG) ignores the SCC classifications[4] in Knight Hawks and simply classifies them all as "Docking Stations".[5]

The following are the only systems listed in Knight Hawks that appear with DS's in ZG (in parenthesis is KH listing):

The following Frontier systems do not appear in the Knight Hawks list.

The following Rim systems are listed with "Docking Stations":

Retrieved from "https://starfrontiers.fandom.com/wiki/Ship_Construction_Centers?oldid=13840"
Community content is available under CC-BY-SA unless otherwise noted.