A Skeinsuit is a type of protective clothing commonly used in the Frontier. Skeinsuits are made of light ballistic cloth and defend against all projectile weapons, gyrojet weapons, rockets, fragmentation grenades, explosives and melee weapons except electrical or sonic weapons. A character hit with such weapons takes half damage, (Divide damage by 2. If the damage can not be divided evenly, the character takes the smaller half.)

Skeinsuits can be worn along with inertia screens. A character wearing both would take only one-fourth damage from ballistic attacks. The suit is ruined when it takes 50 points or more of damage.

Civilian skeinsuits are not very size-adjustable, being much like regular clothes; if worn in an ill-fitting manner, no benefit is accrued.

Military skeinsuits are highly adaptable and can easily be adjusted to fit well a wide range of members of the race it was made to protect.[3] Dralasite skeinsuits are composed of an elastic mesh that has overlapping panels of ballistic material, permitting the wearer to manifest as many limbs as needed without compromising core protection.[4] Skeinsuits made for one race cannot be made to fit a member of another race (without major alterations).

A damaged skeinsuit (i.e. one that has absorbed damage) normally cannot be repaired to restore functionality (i.e. repair lost points), and is commonly discarded in favor of a new one. With GM approval, however, a skeinsuit can be repaired at a suitable shop at a cost of 15 Cr/point of damage for civilian versions, and 10 Cr/point for military skeinsuits.

"Light" skeinsuits function exactly like standard suits, except that they can absorb only a maximum of 20 points of damage before losing functional protection. None of these can be combined with another form of protective clothing, like an albedo suit or a full skeinsuit.

"Heavy" Skeinsuits are rarely seen in the frontier. These also function like standard suits, but can absorb up to 75 points of damage before losing functionality. Wearing such a suit inflicts a 5% penalty on both ranged and melee attacks, due to the relative bulk of the suit. Heavy skeinsuits cost twice as much as their civilian or military counterparts and weigh 2 kg.

Soldier in full-body skeinsuit plus helmet 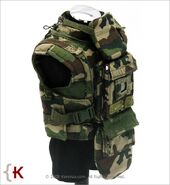 Retrieved from "https://starfrontiers.fandom.com/wiki/Skeinsuit?oldid=10485"
Community content is available under CC-BY-SA unless otherwise noted.