15 kg
Sonic Projectors are a category of Sonic Weapons that hit targets with a highly concentrated blast of sound from a distance, like a firearm. They include the following types:

A sonic stunner is a type of pistol. It is commonly called a stunner or stun pistol. It will stun a victim for d100 turns. The victim can avoid the effect of the hit by rolling his current Stamina or lower. One shot uses 2 SEU. A stunner uses a 20 SEU clip, but can be attached to a beltpack or a powerpack. A target with an anti-shock implant cannot be stunned. Otherwise, only a sonic screen (or suit) can stop the stunner's sound beam.

A refined, less-common version of the sonic stunner is the sonic blaster. A point-blank-to-medium-range weapon, the blaster features a blast setting that causes 3d10 points of damage per shot. Otherwise it operates the same as the sonic stunner. Anti-shock implants are useless against blasts; only sonic suits and screens can ward off the effects of this weapon.

A point-blank-to-long-range weapon, it uses a 20 SEU clip but can also be attached to a beltpack or powerpack. A disruptor uses 4 SEU per shot. Only a sonic screen (or suit) can stop its deadly beam.

This weapon is commonly called a devastator. Due to the weapon's high power consumption, parabatteries are used to power it. 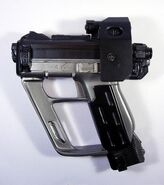 Add a photo to this gallery
Retrieved from "https://starfrontiers.fandom.com/wiki/Sonic_Projectors?oldid=13398"
Community content is available under CC-BY-SA unless otherwise noted.