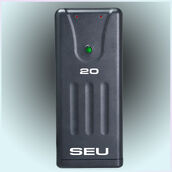 Standard Energy Units (SEUs) are a standardized unit of measurement in the Frontier commonly used for power supplies.[1] They measure the output of a Power Generator, and the capacity of power packs and batteries.[2]

Prior to the introduction of the Credit, SEUs were used in many places as a form of universal currency. They still are used as a trade commodity in remote places where other forms of banking are not available[3]. They are priced at either 1 credit each or 5 credits each.[4]

Retrieved from "https://starfrontiers.fandom.com/wiki/Standard_Energy_Unit?oldid=13884"
Community content is available under CC-BY-SA unless otherwise noted.