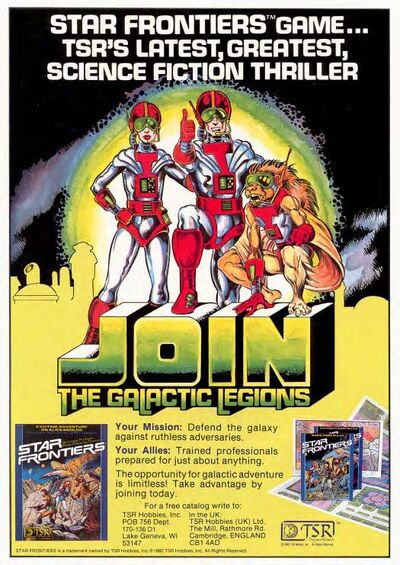 Star Frontiers is a science fiction role-playing game produced by TSR between 1982 and 1985.

Near the center of the great spiral galaxy. Where the stars are much closer together than Earth's sun and its neighbors, a Human race developed. There were not identical to the Humans of Earth, but they were not very different either. When these Humans discovered that waves of sub-space pi-tachyon particles could cross interstellar space faster than light, they realized they had found a link to the stars. A radio message that would have taken years to travel between stars could be sent with sub-space communications in months even weeks. The Humans started broadcasting news of themselves to neighboring stars and soon found they weren't alone.

The Humans made contact with an inventive race of insect-like creatures call Vrusk, who had developed limited space travel decades earlier. One of the Vrusks' mining colonies had already contacted another race, the shape-changing Dralasites. The two races had been exchanging information for several years. The Vrusk and Dralasites were pleased to learn of another race. They sent a wealth of scientific information to the Humans. Using this new knowledge, the industrious Humans quickly developed interstellar spaceships.

Star Frontiers takes place near the center of a spiral galaxy (the setting does not specify whether the galaxy is our own Milky Way). A previously undiscovered quirk of the laws of physics allows starships to jump to "The Void", a hyperspatial realm that greatly shortens the travel times between inhabited worlds, once they reach 1% of the speed of light (12,000,000 kph / 3,333,334 m/s).

The basic game setting is an area known as "The Frontier Sector" where four sentient races (Dralasites, Humans, Vrusk, and Yazirians) had met and formed the United Planetary Federation (UPF). The original homeworlds of the Dralasites, Humans, and Vrusk are not detailed in setting materials, though it is possible that they no longer exist. A large number of the star systems shown on the map of the Frontier sector in the basic rulebook are unexplored and undetailed, allowing the Gamemaster (called the "referee") to detail as he or she sees fit.

Players can take on any number of possible roles in the setting but the default was to act as hired freelance agents of the Pan-Galactic Corporation, exploring the Frontier and fighting the aggressive incursions of the alien and mysterious worm-like race known as the Sathar. Most published modules for the game follow these themes.

Alien Worlds — The unpublished prototype game, produced by Dave Cook and Lawrence Schick. Unlike the final product, Alpha Dawn, Alien Worlds was geared towards more mature gamers, and would have had a fifth race, the S'sessu (who became the enemy Sathar), as well a different skill system.

In the Star Frontiers Q&A column called Starquestions in Dragon Magazine issue 85 (May 1984), the editors told readers that: "Currently, there are no plans to publish the original version of the STAR FRONTIERS game. Much of the material that was left out was felt to be too complex; playability was emphasized in the final version over complete realism."

Star Frontiers: Alpha Dawn — The first published game of the setting. Adventures focused on a personnel level, where characters can play as any of the core four races (Dralasite, Human, Vrusk and Yazirian) in the fields of military, technical or biological/sociological (biosocial) expertise. Rules also includes vehicular chases and combat, but no rules for ship-to-ship combat, as it was assumed that players would use ships as a way to get to, or as a stage for, adventurers.

Star Frontiers: Knight Hawks — This is a continuation of the Alpha Dawn rules, with a focus on ship-to-ship warfare, built around a tactical wargame. The rules also includes rules for zero-gee combat, and running a business with a spaceship. Characters can also learn the higher-level skills needed to run a ship.

Star Frontiers: Zebulon's Guide to Frontier Space — This was going to be the first in a series of overhauls to the Alpha Dawn and Knight Hawks rules and setting, but was cut short; down to one book with priorities being directed towards the development of the Buck Rogers XXVC role-playing game. It is a disjointed collection of new rules and campaign ideas, with elements to make the game play more like (4th edition) Gamma World. It expanded the setting with a timeline of major events, new frontier (namely the Rim Coalition), new races (the Humma, Ifshnit and Osakar from the Rim Coalition, and the Mechanon as a playable race), political groups, new technology, and psychic abilities. The rules expanded the list of available skills, but it also used a highly unpopular "Simplified ACT" (Action Chart) system, first introduced in the Marvel Super-Heroes RPG.

Setting Supplements for other Game Systems

AD&D's Spelljammer Setting - Throughout the 2nd Edition Advanced Dungeons & Dragons Spelljammer fantasy setting, many elements of the Star Frontiers Universe made canon appearances; Yazirians appeared as the Hadozee, Vrusk as the Rastipede, Dralasites as the Plasmoids, and even the Sathar as the Sylix.

Alternate Frontiers - Appearing in Dragon Magazine's 1998 Annual, Steve Bartell wrote an article detailing how to adapt the classic Star Frontiers setting to the Alternity RPG which was the primary science fiction game in TSR's stable. The article has descriptions of Dralasites, Vrusk and Yazirians, as well as Sathar, in Alternity terms and presents rules for converting SF characters to Alternity ruleset characters, as well as some of the more unique pieces of technology of the SF setting.

Star Frontiers, Alpha Dawn, Knight Hawks, and Zebulon's Guide to the Frontier are all registered trademarks of Wizards of the Coast Inc. All of names and artwork used in the rulebooks and supplements are copyrighted by Wizards of the Coast Inc. Third-party additions that do not otherwise infringe on other trademarks or copyrights are own by their respective creator(s).

Retrieved from "https://starfrontiers.fandom.com/wiki/Star_Frontiers_RPG?oldid=9057"
Community content is available under CC-BY-SA unless otherwise noted.