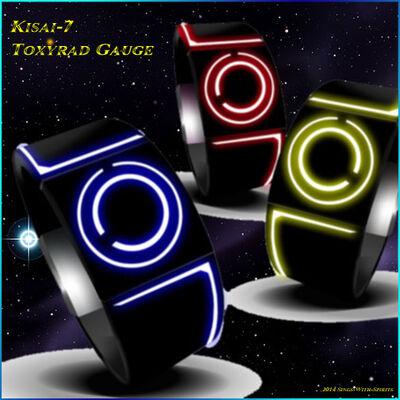 A Toxyrad Gauge, also known as a Toxy-Rad Gauge or simply T-R Gauge, is a device that is worn on an appendage, much like a wristwatch on a human. It has three coloured lights on its face, along with a dial indicating the degree of danger present, based on environmental sampling:

It can be assumed that as more races join the UPF, T-R Gauges will be updated with the new race's toxic thresholds.

Due to its extreme utility in alien environments, T-R Gauges are commonly included in emergency survival packs.

Retrieved from "https://starfrontiers.fandom.com/wiki/Toxyrad_Gauge?oldid=8894"
Community content is available under CC-BY-SA unless otherwise noted.