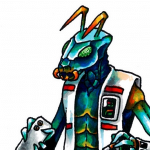 I liked the way the TSR designers thought in the development of the Yazirian race. There must have been a great temptation to do what every other game does when it comes to warlike species - ramp up the strength and dexterity and combat abilities, drop anything even remotely related to intelligence and social niceties down to virtually nil, and call the race balanced. After all, if they´ve been at war for longer than anyone can remember, they should be really good at it, right?

Well, no, actually - not necessarily, when compared to all the others. They may be the apex predator on their home planet, but before they invented spaceflight, at the time when they were still stuck on their planet and their racial characteristics were formed, all they did was fight each other. And if the opposition is a wimp, it´s easy to be warlike and all, even if you don´t look any better in comparison.

So I like the fact that while the Yazirians are mentally equipped for warlike competition, they are relatively frail compared with the other races. A Vrusk will beat you to the draw of your blaster, a Human will wallop you in a drawn-out fist fight even if you dish out as good as you get, because hit points. It´s nice playing that Proud Warrior Guy without all those physical characteristics and fighting bonuses - you have to go by sheer attitude. And most of the time, it works.

The other trap that TSR avoided with the flying monkeys was making their worlds the Planet of Hats. Not every Yaz is a soldier - and it´s actually way cool to play a scientist or tech with that kind of warrior´s attitude. it´s even cooler when you take "war" (or "social inequality") as your life enemy. Go ahead, surprise your fellow players.

Somehow, no two artists seem to be able to agree on what a Dralasite looks like. Exactly how thin or thick are those limbs and digits, and how quickly can they change length or thickness? Some illustrations show Dralasites with short and stubby limbs, others have them do a Reed Richards and grab a gun from across the room with whip-like elongations. That´s right, your blob could be a molasse-like slowly morphing lump of putty or Elastigirl´s and Otho´s lovechild, depending on who draws xir.

Alpha Dawn states that it takes five minutes for a limb to grow, so I think I´m safe that the chameleon-tongue flick stretches belief a bit... but at the end of the day it depends on your GM´s vision of Dralasites what you can and what you can´t do. Squeeze through an opening? Fire a boulder from a slingshot that uses yourself as a rubber string? Frustrating if your own vision differs.

Dralasites, with their penchant for bad puns and lame jokes are straight out of Space Rangers. Somehow I always imagined them with Doc Kreuger´s voice (and did a passable imitation once). When I read the rules for the first time, I locked on to that one racial character trait, and could not help but think that TSR knew their customers just a bit too well. Dralasites appear to be a tailor-made outlet for that special kind of "player humour" that you hear only at a role-playing table. Of course, that kind of bad jokes is intrinsic to any kind of role-playing, from high elves to grungepunk... but in Star Frontiers, a Dralasite player can deliver them in character without breaking stride. Jackpot.

This laser pistol model was somehow iconic of the whole Star Frontiers franchise. I would idly doodle one at a meeting or café or convention, and some total stranger would come around and ask me, "excuse me, but ist´t that the laser from the Star Frontiers game?", which would have us two strangers reminisce for an hour about those good times (and feel a little pang at how long a time ago that game had come out). Happened to me not one, but five times already. Honest.

This is the Vrusk variant of the trusty Alpha Dawn laser pistol. I remember being fascinated as a teenager that someone (Jim Holloway *cough*) actually thought deeply enough about the needs of different species to invent a ball grip for insectoids. From there it was only a little hop of the imagination to - ha! - Vrusk "highball" glasses whose form actually mirrored the name, Dralasite waiters´ head-trays, and keyboards that changed key sizes to accomodate the user´s species. Mind you, that was in the eighties, and I was in my teens. Everything was exciting by then.

A PGC agent wearing an albedo suit and holding a gyrojet pistol at the ready. Note the hexagonal pattern on the tiny albedo mesh fibrils. I liked the limited selection of weapons and armour (as it were) in the original Alpha Dawn ruleset very much. There was just enough stuff to please the hardware bunnies, but we played campaigns low on gunfights anyway. A weapon might crop up here and there, but it was never relevant in the grand scheme of things whether it was a gyrojet or laser pistol or something else entirely. There were a few instances of literal "Chekhov´s guns", such as where one agent was encountered by the players at the starport wearing a gyrojet pistol in a holster, which gun later became the means to implicate her in a Sathar plot.

The pile of military hardware that was added in the course of the expanding SF universe didn´t really add much real variety; maser, proton or Gauss weapons didn´t do that much more than the original weapons did (which was putting holes into people), and I felt that the increased array of weapons -

So my group(s) and I went for only a limited selection of the Alpha Dawn weaponry in our games. Nobody seemed to miss the grenade launchers and masers terribly.

A female Vrusk scientist. The Vrusk are one of my favourite races in the Star Frontiers game. I wanted to try out the coloration of a middle-aged Vrusk; somehow it´s hard to imagine how a Vrusk looks in colour unless you actually draw them. The legs are a shade lighter and greener; I surmised that the aging colour change would start with the extremities.

I remember that in one episode of play, I described a wounded Vrusk, noting that the usual vivid colour of its exoskeleton had faded to a sickly dull pea green. It immediately became "house canon" with us that the physical state of a Vrusk would reflect in the colour and texture of its chitinous skin. A drug-addicted Vrusk had scabby and dull chitin that looked as if he had been dusted with flour. An aged Vrusk had very pale olive colouring and nearly translucent joints. One malnourished Vrusk child in a band of refugees had "grayscale", the Vrusk equivalent of mange, and a wealthy Vrusk tycoon suffered from "Tdlax´ Disease", an incurable affliction where both the exoskeleton and the inner bones over time became soft and brittle. Over time all these instances of neglected NPC chitin prompted the party´s Vrusk player to become somewhat vain and buy a lot of cosmetic articles for his Vrusk - carapace polish, joint wax, moult aid, and the like.

A standard maintenance robot such as might be employed by any starfaring crew to keep their vessel spaceworthy. The robot can develop and implement an inspection schedule by itself and assist in minor repairs; its articulated legs are equipped with low-traction wheels and magnetic clamps so it can use ladders and stairwells (and anchor itself to the floor if the ship´s gravity is disabled). The robotic "programming" in Star Frontiers is very nifty (it was the first thing I adapted to Traveller whenever I played that game), and we had tons of fun whenever a poorly-worded mission script from the players´ roboticist caused a robot to do the oddest things from an all-too-literal interpretation of it - or run into fatal logic loops. Good times were had by everyone.

Retrieved from "https://starfrontiers.fandom.com/wiki/User:KnightOwlet?oldid=12814"
Community content is available under CC-BY-SA unless otherwise noted.